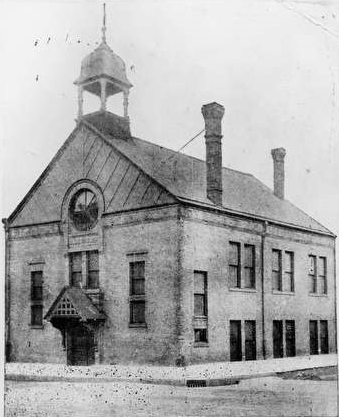 Services were held at the first location for only two months. The church moved into another temporary location until June of 1869 when St. Mark moved into a more permanent structure, formerly a German Zion Evangelical Congregation building, in the Oak Creek neighborhood. This same year the congregation purchased property near the Milwaukee River. Reverend William R. Alexander oversaw the construction on this new property beginning in 1876 and held the first service at the new location on April 3, 1887.

Although St. Mark became known as the “Friendly Church,” Rev. Alexander and subsequent ministers ensured that St. Mark was both sophisticated and strait-laced. The church recruited ministers who had received formal training in a seminary and therefore would provide dignified, proper sermons where shouting was discouraged. These staid services attracted Milwaukee’s black elite and successful working class by promoting middle class respectability.

By 1914, St. Mark held over 100 members, by far the most of the three black churches established in Milwaukee prior to World War I. Calvary Baptist and St. Benedict, both established in the first decade of the 1900s, had congregations composed mostly of African Americans migrating from the American South. St. Mark’s combination of size, history, and elite parishioners made it the religious and civic center for black Milwaukeeans in the early 20th Century.

The church moved again in 1914. By 1953, the church had outgrown its location and moved to a much larger structure. The 1953 structure was in the proposed pathway of the North-South Expressway constructed in the 1960s. Because of this, St. Mark moved briefly to a new building in 1966 before settling in its current location in 1969 in the Arlington Heights neighborhood.