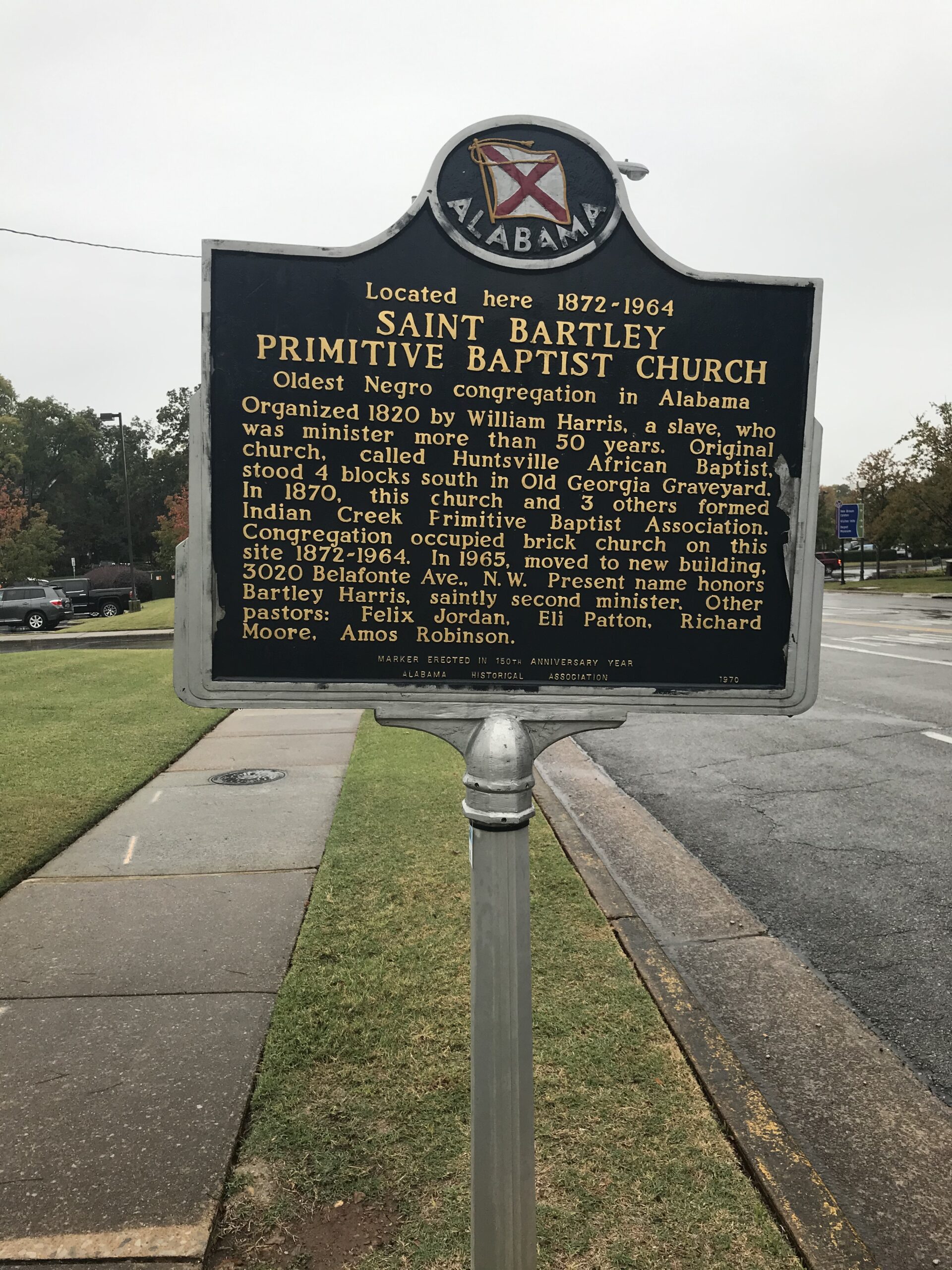 Instituted in 1808 by enslaved blacks, St. Bartley Primitive Baptist Church of Huntsville, Alabama, exemplifies 206 years of black religious independence.  It was located originally outside the city limits of Huntsville near present day Governors Drive and Madison Street, among the tombstones, dogwoods, and flowering trees of the Old Georgia Graveyard—a slave graveyard, and the only land that enslaved blacks could claim.  The original congregation appears to have been composed of slaves transported by their owners from Georgia to northern Alabama. St. Bartley, initially called the African Huntsville Church, is recognized widely as being Alabama’s oldest black church.

Early worship services at African Huntsville Church occurred at night so that members might express freely their religious feelings and their desires for freedom and self-expression, which were outlawed in Alabama at that time.  Although the specific date is unknown, the African Huntsville Church erected a small church edifice in the graveyard.  Shepherded by William Harris, a free black man, the church flourished, subsequently joining, in 1821, the Flint River Association in communion with other churches located along the Tennessee River. Although run by whites, the association never attempted to impose its supervision on African Huntsville.  As a consequence the church congregation grew.  It numbered 265 by 1840, and 432 in 1849.

Slaves and free blacks, however, lived in an increasingly dangerous world in northern Alabama toward the end of the antebellum period.  As the South moved closer to disunion and war, the Huntsville city council restricted access to the city for any black citizen who arrived in Huntsville after 1832.  Nevertheless, black men represented African Huntsville at annual association meetings as designated in the 1814 Flint River Association constitution, and continued to do so from 1821 to 1866.

Historians attribute this evenhanded dealing by the Association to its doctrinal stance. The Flint River Association held that “the merits of Christ (grace) alone are sufficient for the salvation of sinners, unaided by human effort. ”  Elder Harris preached that man is saved by grace alone as he led the church into the Primitive Baptist fold.  Primitive Baptists believe in salvation by the grace of God, and that scripture alone should guide one’s faith and life.  In keeping with this firm belief in scripture, they believed that all men are equal in the eyes of God (see Galatians 3:28).

The original church building was destroyed by fire during the Union occupation after
the Civil War and was rebuilt in 1872 with money appropriated by the United States Congress.  People or organizations who suffered financial losses during the conflict, and who could prove they were not sympathetic to the Confederacy, were entitled to compensation from the Federal government.  President Ulysses S. Grant signed the appropriation papers authorizing the transfer of those funds.

The current building, rededicated as St Bartley Primitive Baptist Church in honor of the second pastor and located at 3020 Belafonte Avenue NW, in Huntsville, opened its doors for worship on the first Sunday of December 1965.  Saint Bartley now has 1,300 members and is led by the eighth pastor in church history, Elder William T. Gladys.