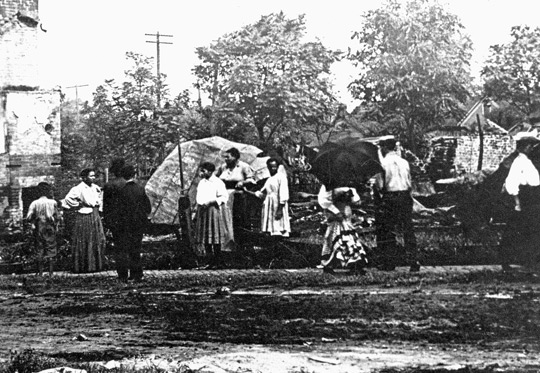 In mid-August 1908, the white population of Springfield, Illinois hastily reacted to reports that a white woman has been assaulted in her home by a black man.  Soon afterwards another instance of an assault by a black man on a white woman was reported.  These incidents, coming within hours of each other, inflamed a gathering mob.

Springfield Police took into custody an African American vagrant, Joe James, for one of the assaults.  Another man, George Richardson, a local factory worker was arrested for the second assault.  A mob which had been forming since the news of the assaults was first announced now quickly assembled at the Sangamon County Courthouse to lynch the two men in custody.

Unable to get the accused men whom the Sheriff announced had been moved to an undisclosed location, the mob turned its wrath of two other black men, Scott Burton and William Donegan, who were in the area.  They were quickly lynched.

The mob then vented its fury on the homes of black families in Springfield.  After rampaging through the city they extended their violence into small communities outside the city limits.  The mob targeted stores which had guns and ammunition.  Mob leaders carefully directed the participants to destroy only homes and businesses either owned by blacks or which served black patrons, thus leaving nearby white homes and businesses untouched.

Some Springfield blacks fought back in self-defense.  They shot back when fired upon, and the first victim of the lynch mob, Scott Burton, used his shotgun in an attempt to save his life and home.  The second victim lynched was an 84-year-old cobbler named William Donegan, whose reputation had been tainted in the eyes of the mob by the fact that he had been married to a white woman for over 30 years. When the carnage finally ended six black people were shot and killed, two were lynched and hundreds of thousands of dollars worth of property destroyed. About two thousand black people were driven out of the city of Springfield as a result of the riot.

About 150 suspected mob participants were arrested.  Threats from other mob participants restrained people from testifying against those suspected of the violence. Later it was revealed that George Richardson, who was initially charged with assault, had been wrongly identified and the indictment was dismissed.

The Springfield Riot made the capital of Illinois and the home of Abraham Lincoln the center of national attention especially since this was the first race riot in the North in over half a century. Perhaps the most lasting consequence of the riot was its impetus in getting white reformers such as Jane Addams and black civil rights activists such as W.E.B. DuBois to create the National Association for the Advancement of Colored People (NAACP), one year later following an interracial conference in upstate New York.