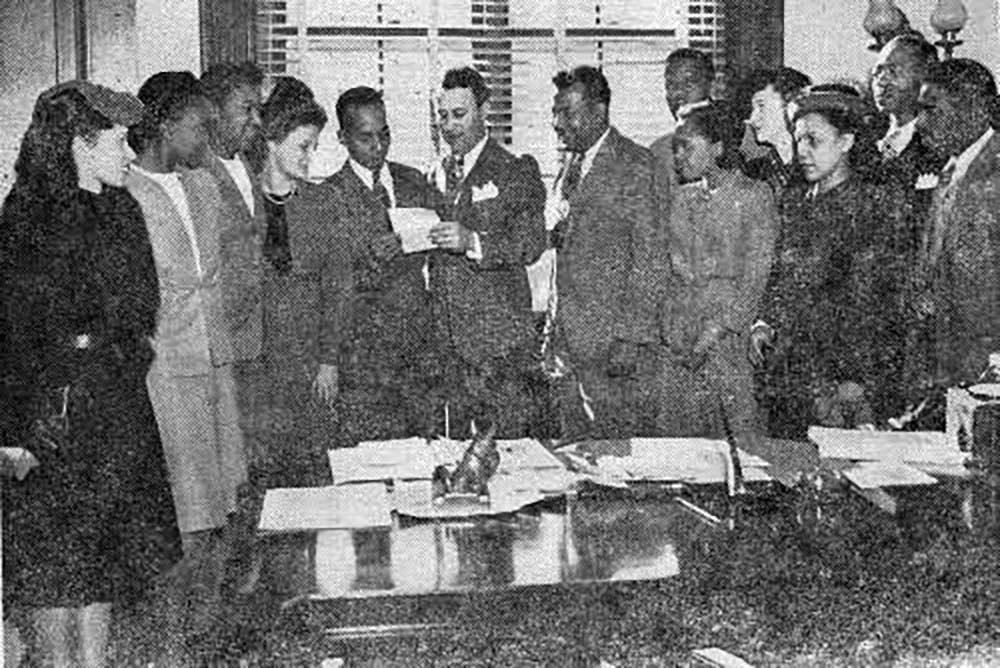 The Southern Negro Youth Congress (SNYC) was formed in 1937 by young people who had attended the National Negro Congress (NNC) in Chicago, Illinois in 1936 and wanted to implement its call for action. These young leaders, including veteran activists James Jackson, Helen Gray, Esther Cooper, and Edward Strong, gathered in Richmond, Virginia in 1937 and formed the SNYC.  They initially established their headquarters in Richmond before moving it to Birmingham, Alabama in 1939.  SNYC had the support of prominent black adult leaders including Mary McCloud Bethune, Paul Robeson, Charlotte Hawkins Brown, A. Philip Randolph, and W.E.B. DuBois.

The first SNYC conference was held in Richmond, Virginia on February 13 and 14, 1937 at the Fifth Baptist Church.  Five hundred thirty-four delegates from across the South attended the meeting including individuals from almost every historically black college as well as delegates representing YMCA branches and chapters of the Girl and Boy Scouts across the region. One international delegate, a young woman from China, also attended.  Like its parent organization, the National Negro Congress, SNYC also included Communists among its members.

Officers were elected to one year terms while the adult advisory board raised funds and offered advice.  The first successful SNYC campaign helped black tobacco workers organize a union in Richmond.  Next it organized anti-lynching campaigns across the South.

Over the next twelve years SNYC formed chapters in ten southern states with a total membership of 11,000 at its peak.  Over those years the organization encouraged southern blacks to join the Congress of Industrial Organizations (CIO), helped register voters, and on one occasion visited the White House to enlist Eleanor Roosevelt’s support for their efforts.  During World War II they testified before the Fair Employment Practices Committee describing employment discrimination in the South.  SNYC members also sponsored the Caravan Puppeteers, a political puppet show, to explain how rural blacks could secure the right to vote.  Their newsletter, Cavalcade, awarded prizes to college students for art and poetic interpretation of Howard Fast’s 1944 novel, Freedom Road.

The organization made extraordinary progress in making rural southern black people aware of their rights and in teaching strategies for protest. Their activities also gained the attention of opponents ranging from Eugene “Bull” Connor, the Chief of Birmingham’s Department of Public Safety, to the Federal Bureau of Investigation (FBI). Despite numerous acts of intimidation by both organizations as well as groups such as the Ku Klux Klan, SNYC inspired a generation of African Americans, including Sallye Bell Davis (the mother of Angela Davis) and Julian Bond, Sr., to become political activists.  In doing so, the Southern Negro Youth Congress laid the ground work for the civil rights movement of the 1950s.