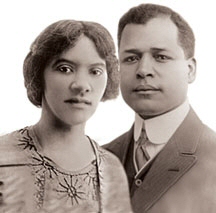 John Alexander Somerville emigrated to the United States from Jamaica around 1900.  He and his wife, Vada Watson Somerville, were both graduates of the University of Southern California School of Dentistry.  Graduating with honors in 1907, he was the first black graduate, and his wife was later the first black woman graduate.  In 1914, only three years after its founding in New York City, New York, the Los Angeles branch of the NAACP was created at the home of John and Vada Somerville.  His first major business venture, the Somerville Hotel, was a principal African American enterprise on Central Avenue, in the heart of the Los Angeles African American community.  When it opened in 1928 it was one of the most upscale black hotels in the United States, and counted a number of African American celebrities among its guests.

With the onset of the Depression, the facility was sold and renamed the Dunbar Hotel in honor of the famed black poet.  The scene for at least one black film, and a major community landmark for many years, the Dunbar Hotel declined in the 1960s, but has now been revived and has been designated a Los Angeles Historic Cultural Monument.  In addition to developing other properties in the Los Angeles area, throughout the years both he and his wife were active in community affairs and civil rights work.  In 1949 he published his autobiography, Man of Color, and in addition to being the second African American on the Los Angeles Chamber of Commerce, served on the Police Commission from 1949 to 1953.  In 1953 he was named Officer of the Order of the British Empire by Queen Elizabeth II.