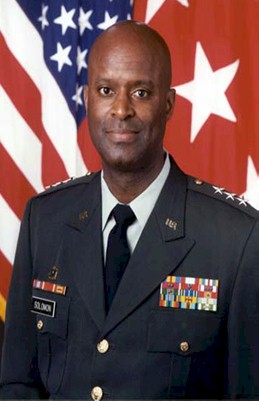 Billy King Solomon is a retired United States Army Lieutenant General.  Born November 16, 1944 in Oakwood, Freestone County, Texas, he attended Prairie View A&M University and graduated in 1966 with a Bachelor of Science degree in Agriculture.  While at Prairie View he enrolled in the Reserve Officers Training Corps (ROTC) and upon graduation was commissioned a Second Lieutenant in the Quartermaster Corps.

Over the next three decades he rapidly climbed the ranks and held a variety of critical positions.  Less than a year after joining the Army, Solomon began his first tour of duty in South Vietnam during the Vietnam War where he served with the 266th Supply and Service Battalion.  While in Vietnam he was promoted to Captain.  He was then briefly stationed at Fort Hood, Texas before returning to serve in Vietnam from 1971 to 1972 as Commander of Headquarters Company with the 88th Supply and Service Battalion.

In 1972 he was assigned to the 109th Military Intelligence Group at Fort Meade, Maryland and from there was assigned to the Panama Canal Zone. From June 1982, Solomon, now a Colonel, served as protocol officer in the Office of the Chief of Staff of the Army.  Following assignments at Fort Polk, Louisiana and Fort Hood, Texas, Solomon was promoted to Brigadier General on October 1, 1992. He then served as Commander of the Joint Logistics Task Force for United Nations operations in Somalia and then Assistant Chief of Staff for United States forces in Korea. From 1997 to 1997 he was Director of Logistics and Security Assistance of United States Army Central Command at MacDill Air Force Base, Florida from 1997 to 1999, and finally Commanding General, Combined Support Command at Fort Lee, Virginia from 1999 to 2002.  Over the last decade of his service, General Billy Solomon led the development of Army doctrine, training, material, and IT requirements for the Combat Service Support Branches of the U.S. Army.

At the end of his service, Solomon was a three-star Lieutenant General of the U.S. Army Combined Arms Support Command (CASCOM) which is located at Fort Lee, Virginia and trains over one hundred eighty thousand students a year. General Billy King Solomon retired from the military on September 30, 2002, after a total of thirty-six years of service.  Through those years Solomon acquired a multitude of illustrious awards and honors including a Defense Distinguished Service Medal, a Distinguished Service Medal (U.S. Army), a Legion of Merit, a Bronze Star Medal, a Meritorious Service Medal, an Army Commendation Medal, and an Army Achievement Medal.