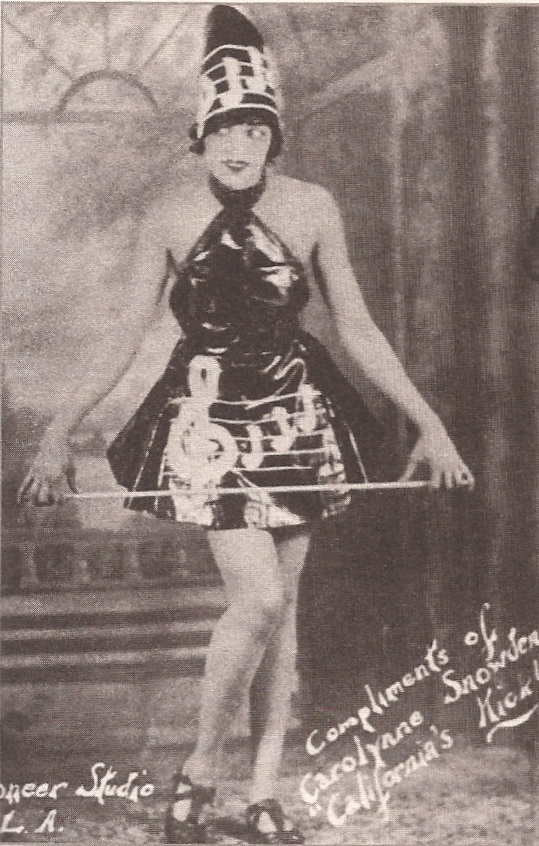 Caroline Snowden (she later changed her first name to Carolynne), known as “California’s Josephine Baker,” was born on January 16th, 1900, in Oakland, California.  From an early age, Snowden knew that she wanted to be a performer and, despite the lack of opportunities for African Americans, she relentlessly pursued that dream.  Snowden got her start dancing in the jazz clubs of Los Angeles’ Central Avenue.  By the 1920s her career was established.  She worked as a showgirl at Club Alabam, spent time with the Lafayette Players (an all black theatre troupe from Harlem), and challenged racial taboos when she headlined at Culver City’s legendary Cotton Club, a whites-only jazz club.

As her career progressed, Snowden began to concentrate on breaking into film acting, an industry where opportunities for people of her race were even more limited.  Snowden persevered and although she continued to dance and sing in clubs, she considered it to be “between” acting roles rather than her primary occupation.  She finally succeeded and became one of the first African Americans to land a movie role in the “white theater” as opposed to productions by an all black troupe.

Snowden worked hard to break down racial barriers; not only for herself, but for all African Americans.  One of her early triumphs occurred when she worked on an Erich von Stroheim picture.  She compelled the studio to give her a dressing room next to the white actors.  Throughout the 1920s and 1930s, Carolynn performed in 14 feature films.  Her most famous film, 1935’s In Old Kentucky, she and costar Stepin Fetchit had an on-screen love affair which was a first for black actors in a major Hollywood production.   While the film was important in breaking barriers for subsequent black actors, Carolynne Snowden was unable to play any but traditional “maid” roles in all of her subsequent movies.

Despite these challenges to her professional career, Carolynne Snowden remained an active supporter of efforts to help black actors break into the film industry.  When the annual meeting of the National Association for the Advancement of Colored People (NAACP) was held in Los Angeles in 1928, Snowden staged performances to raise money for the organization and to entertain the attendees.  Although her own film career ended in the 1930s, Carolynne Snowden remained a staunch advocate for African Americans in film until her death in 1985.