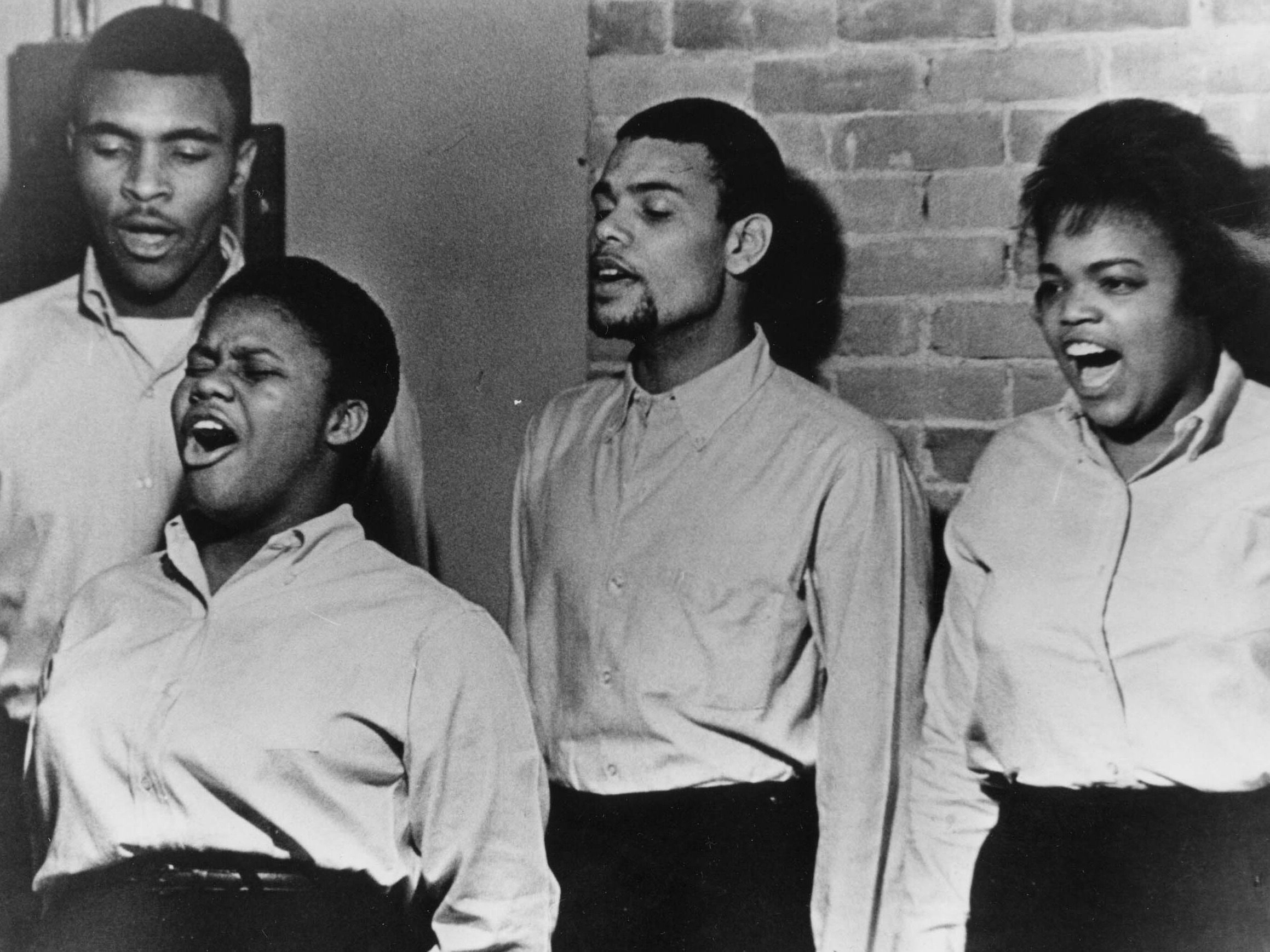 Coordinating Committee (SNCC) Freedom Singers were a musical group primarily active between 1962 and 1966, singing “freedom songs” in order to fundraise and organize on behalf of SNCC.

The Freedom Singers emerged out of the Albany Movement of 1962. After witnessing the Albany Movement’s mass movement musical culture, folksinger Pete Seeger suggested to SNCC executive secretary James Forman that a group could perform songs arising out of the civil rights movement in order to raise money for SNCC, educate young northerners on the events of the movement, and organize people to involve themselves. Eventually, the idea reached Albany Movement leader (and SNCC field secretary) Cordell Reagon in October 1962.  By the end of the year, a group was organized consisting of Reagon, Bernice Johnson, Rutha Harris, and Charles Neblett, occasionally joined by Bertha Gober. They were all trained musicians as well as SNCC field secretaries.

Over the course of 1963, the group embarked on a tour of colleges, high schools, small auditoriums, and house parties across the northern United States. The group’s performances consisted of many of the most well-known traditionally-based freedom songs, such as “We Shall Overcome” and “Ain’t Gonna Let Nobody Turn Me ‘Round,” in addition to newer, completely original topical songs written by SNCC members.

The group had several key performances. In June 1963, they performed at a SNCC fundraiser with gospel artist Mahalia Jackson. The following month they sang at the Newport Folk Festival, performing their own songs while also serving as a backup choir for other artists such as Bob Dylan. In August 1963, they were the only group of movement-affiliated song leaders to perform at the March on Washington for Jobs and Freedom. Their increasing exposure led Mercury Records to sign them to a recording contract; they recorded a studio album in October 1963.

Other commitments caused the initial group to disband at the end of 1963. However, a second, normally all-male group was quickly organized, which was active from 1964 to 1966. This second group’s lineup was flexible; while first-group veteran Charles Neblett as well as brothers Matthew and Marshall Jones were constants, other performers with the group included James Peacock, Willie Peacock, Carver Neblett, Cordell Reagon, Emory Harris, and Betty Mae Fikes. Many of this group’s members were songwriters, and its repertoire consisted of a diverse mix of traditional freedom songs, doo-wop, R&B, folk, and even songs by the Beatles.

By 1965, however, the group began to perform and organize in opposition to the Vietnam War in addition to traditional civil rights activities. Changes in SNCC’s leadership in 1966 and a turn towards black separatism restricted the ability of the group to find audiences. By the end of 1966 the group had disbanded.

Since the 1980s, performers from both groups have occasionally reunited under the Freedom Singers moniker. In 2010, Bernice Johnson, Charles Neblett, and Rutha Harris entertained President Barack Obama at the White House during a concert series that also featured Bob Dylan and Smokey Robinson.