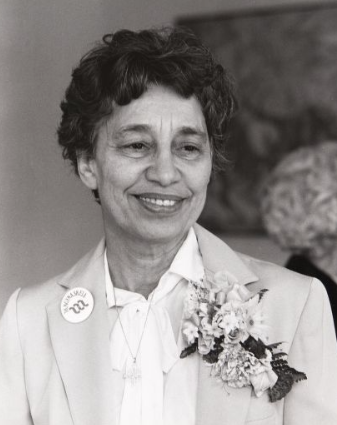 The daughter of college graduates, Mabel M. Smythe-Haith is so far the only black American woman who was named a U.S. ambassador after her husband had earlier served in the same capacity.  Mabel Murphy was born into a family of four siblings on April 3, 1918 in Montgomery, Alabama. At age 15 she entered Spelman College, then an all-black school for women in Atlanta, Georgia, where she was soon named an editor for the Campus Mirror and a choir member.

Murphy transferred to Mount Holyoke College in Massachusetts and completed her bachelor’s degree there in 1937. Two years later she married Hugh H. Smythe, whom she had first met in Atlanta. Their union produced a daughter, Karen Pamela Smythe.

Acquisition of a master’s degree from Northwestern University and a Ph.D. in economics and law from the University of Wisconsin prepared Smythe to teach briefly at three historically black institutions, Fort Valley Normal and Industrial Institute (now Fort Valley State University) in Georgia, Lincoln University in Jefferson City, Missouri, and Tennessee A&I University (now Tennessee State University) in Nashville, Tennessee between 1937 and 1939.  Subsequently Murphy taught at Brooklyn College in New York, Shiga University in Japan, where she learned the Japanese language, and finally Northwestern University, from which she retired in 1985 as the Melville J. Herskovits Professor and Director of African Studies. In retirement she was a guest scholar at the Woodrow Wilson International Center for Scholars.

Smythe had also worked as a deputy director of the NAACP Legal Defense and Education Fund, where she helped Thurgood Marshall in preparing the monumental Brown v. Board of Education desegregation case. She and her husband, Hugh, assisted James H. Robinson in launching Operation Crossroads Africa in 1958, a forerunner of and inspiration for the U.S. Peace Corps. She also served as a delegate to the 13th General Conference of UNESCO in 1964, a consultant for Encyclopedia Britannica; and Director and as Vice President of the Phelps Stokes Fund. Smythe was also a trustee of the Cottonwood Foundation; and she was a Scholar-in-Residence at the United States Civil Rights Commission. Among her published writings are The New Nigerian Elite (Stanford University Press, 1960), co-authored with husband Hugh Smythe, and the widely used The Black American Reference Book (Prentice Hall, 1976), of which she the principal editor.  Her scholarly articles appeared in the journals Social Forces, Journal of Negro Education, Southwestern Social Science Quarterly, and American Scholar, among other publications.

In 1962 President John F. Kennedy appointed Smythe to the State Department’s Advisory Council for African Affairs. In 1966 President Lyndon B. Johnson appointed Hugh Smythe U.S. Ambassador to Syria, and she traveled with her husband to Damascus.  Eleven years later President Jimmy Carter chose her as U.S. Ambassador to Cameroon, and as U.S. ambassador to the Republic of Equatorial Guinea.  She held the posts concurrently.

In 1985, seven years after the death of Hugh Smythe, Mabel Smythe married Robert Haith Jr., a retired hospital director, who died in 1988. Among Smythe-Haith’s numerous recognitions are two honorary doctorates and the U.S. Information Agency Outstanding Service Award. Diagnosed with Alzheimer’s disease in 2000, she moved from Washington, D.C. to Tuscaloosa, Alabama to live with her sister. Mabel Murphy Smythe-Haith died there on February 7, 2006. Her extensive African art collection was donated to Spelman College and her papers are housed in the Library of Congress.