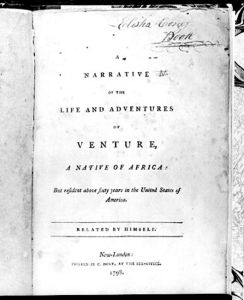 Venture Smith was a West African who was captured as a boy and sold into slavery in New England. He eventually purchased his own freedom, the freedom of several other slaves, and in his old age he wrote the earliest autobiography by an African American. His autobiography joined earlier slave narratives by British slaves that were published by abolitionists, and remains a testament to a remarkable life.

Smith’s autobiography is divided into three chapters. The first tells of his childhood in West Africa, his family and daily life, and then the invasion of slavers who tore him away from his home. The story of his capture includes the death of his father, who the slavers tortured to death in front of him, the march to the coast, and his sale to a New Englander, Robinson Mumford, for four gallons of rum and a piece of calico. Mumford renamed the boy “Venture,” to commemorate his personal investment in the slave trade.

In 1739, Venture and his new owner arrived in New England after traversing the Middle Passage. The second chapter covers his time in slavery, including his marriage to fellow slave Meg, his transfer between several owners and leasers, one aborted escape attempt, and his efforts to earn enough money to buy himself freedom. After almost five years of working odd jobs at night and in every spare moment, Venture Smith was able to save enough money to buy himself from his last master, Oliver Smith.

The third chapter of Smith’s autobiography narrates his life post-slavery. It is a story of much difficult work, mostly with the aim of purchasing his wife and children. Much of the story details  jobs done, land bought and sold, contracts broken and hopes dashed. Life as an ex-slave wasn’t easy; Smith tells of the deaths of his oldest son and his daughter, and the several times he invested money only to be cheated without recourse to the law. However, he had some successes too, and in his old age Smith owned over 100 acres of land in Connecticut and three houses, and in spite of his blindness and poor health he described how happy he was that his wife, who he married for love and worked so hard to buy from slavery, was still alive.

Venture Smith’s autobiography was published in 1798, seven years before his death in 1805. In 2006 his descendants worked with the BBC and a team of archaeologists to exhume his grave and take DNA evidence from his remains in an effort to trace his ancestry in Africa and learn more about his early life and family. However, the results were inconclusive.