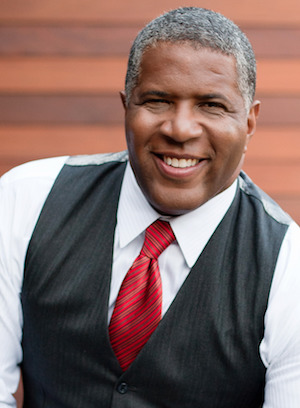 Robert Frederick Smith is best known as the founder, chairman, and CEO of Vista Equity Partners, a multi-billion-dollar private equity and wealth management company that employs over thirty thousand people around the world and focuses on the growth of firms that develop enterprise software. Forbes ranked him as #163 on its list of the richest people in the United States in 2019 and #355 on the Billionaires List.

Smith was born in Denver, Colorado, on December 1, 1962, to educators Dr. William Robert Smith and Dr. Sylvia Myrna Smith. When Smith was a toddler, his mother took him to the March on Washington where Dr. Martin Luther King Jr. delivered his “I Have a Dream” speech. Smith attended Carson Elementary School and Gove Junior High School in Denver before graduating from Denver’s East High School. In high school, he applied for a summer internship at Bell Labs but was told the position was for college students. After much persistence, however, he got the position and that summer he developed a reliability test for semiconductors.

Smith earned a B.S. in chemical engineering from Cornell University. Afterward, he worked as an engineer for Air Products and Chemicals, The Goodyear Tire and Rubber Company, and Kraft General Foods. Smith holds two patents in the United States–one for a coffee brewer filtration device (1993) and another for a coffee brewing element (1995). Smith enrolled in the Columbia University School of Business and earned an M.B.A in 1994 with concentrations in finance and marketing.

Smith left Goldman Sachs in 2000 to found his own company, Vista Equity Partners. The company has had over one hundred and forty completed transactions since its founding. Vista Equity Partners have managed funds for hundreds of limited partners, some of which include prominent public, private, and corporate pension plans, endowments, family offices, and people with high net worth. Buyout Magazine in 2012 awarded the company the Gold Medal as the top performing Vintage Buyout Fund in the United States.

Smith, a member of Alpha Phi Alpha Fraternity, is also a philanthropist. As a child he watched his mother send off a $25 check to the United Negro College Fund each month.  With her example, he became dedicated to funding programs that help inner city youth by introducing them to technology.  He founded Project Realize which is a national effort to help inner-city companies implement specific operational improvements. He is a member of the Leadership Circle for the Martin Luther King Jr. Memorial in Washington, D.C.; an active supporter of, Children’s Opportunities for Music Participation (COMP) in Chicago, Illinois, and Austin, Texas; and a trustee of the Boys and Girls Clubs in San Francisco, California.  He his the first non-New York City resident to be named chairman of the city’s Carnegie Hall board.  In 2016, he donated $20 million to the Smithsonian National Museum for African American History and Culture and another $20 million to Cornell University to  increase the number of African American students in engineering. In 2019, he donated $40 million to Morehouse College to pay off the student debt of graduating seniors.