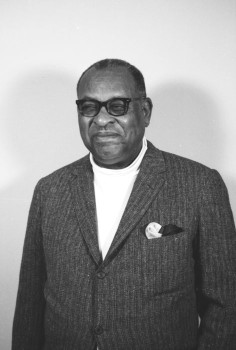 Lonnie Smith was a well-known dentist in Houston, Texas, an officer in the Houston branch of the National Association for the Advancement of Colored People (NAACP), and a civil rights activist.  He is best known for his role in the landmark U.S. Supreme Court case bearing his name, Smith v. Allwright.

Smith was born in Yoakum, Texas in 1901.  He graduated from Providence Hill High School in 1919 and then attended Prairie View A & M College for two years.  He earned a Doctor of Dental Surgery degree from Meharry College in Nashville, Tennessee in 1924.  Smith married Janie Mae Dunn that same year and in 1925 he opened a dental practice in Galveston, Texas.  Smith moved his practice to Houston in 1929.

The case that he is most associated with, Smith v. Allwright, began in 1940. The Texas State NAACP had by that point been engaged in a legal fight against Texas’s all-white primaries for almost two decades. All-white primaries were closed primaries that excluded African Americans and other people of color.  Across the South but in Texas in particular, the Democratic Party was thus declared closed to black voters.  Since the Democrats dominated virtually all local and statewide elections, that closure effectively disenfranchised hundreds of thousands of black voters across the state.

Flanked by witnesses, black Texas voters repeatedly attempted to cast ballots in the primary since Dr. Lawrence A. Nixon first tried to vote in El Paso in 1924. Each time they were predictably turned away with each denial helping to build documented evidence to bring forward in an eventual federal lawsuit.  In 1940 Smith became the latest black Texan denied the vote.  The NAACP chose Smith’s denial as its test case because of its careful calculation that the dentist’s credibility and community standing would help its legal challenge.

Dr. Lonnie Smith attempted to vote in the 1940 Harris County, Texas Democratic Primary.  He was denied a ballot in the all-white primary.  The NAACP Legal Defense Fund almost immediately filed a lawsuit in U.S. District Court in Houston demanding redress based upon the denial of 14th and 15th Amendment rights of Smith by the precinct election judge S. S. Allwright.  The initial federal court judgment favored Allwright, but the NAACP appealed all the way to the U.S. Supreme Court.  Thurgood Marshall, the lead NAACP attorney successfully argued the case before the high court. In an 8-1 ruling the Supreme Court on April 3, 1944 found that in states conducting a single-party primary, that primary is “public” rather than “private” and therefore protected by the Constitution.  The Smith v. Allwright case was the NAACP’s most important legal victory in its history and became an important precedent for the 1954 Brown v. Board of Education case.

Dr. Lonnie Smith voted regularly in Houston after 1944 and went on to serve as a Democratic Precinct Committee Member in the same precinct where he was once denied a ballot.  He also served as president of the A. A. Lucas chapter of the NAACP in Houston before his death in that city in 1971.