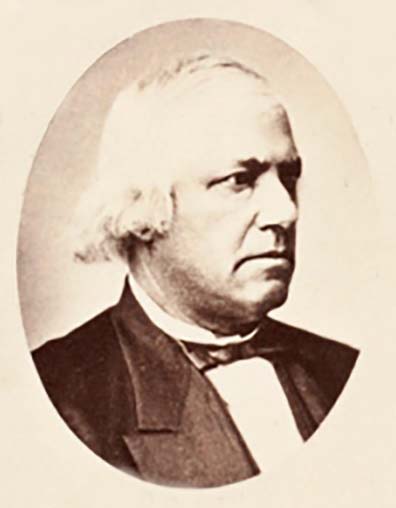 Joshua Bowen Smith, caterer, abolitionist, and state senator, was born in Coatesville, Pennsylvania in 1813.  Details regarding his childhood remain obscure.  However, it is known that he was educated in the public school system of Pennsylvania with the assistance of a wealthy Quaker.

In 1836 Smith traveled to Boston and worked as a headwaiter at the Mount Washington House.  After catering for prominent black Boston abolitionist families for several years he started his own catering establishment.  Over the 25 years that followed he accumulated considerable wealth catering for numerous Boston abolitionist organizations and Union soldiers during the Civil War.  In the process he was introduced to and befriended many notable abolitionists, including William Lloyd Garrison, George Luther Stearns, Robert Gould Shaw, Theodore Parker, and Charles Sumner.

Throughout his life Smith fought vigorously for the abolitionist cause.  Along with Lewis Hayden he publicly denounced the 1850 Fugitive Slave Act, which made it a federal crime to assist run-away slaves or impede the process of their re-apprehension.  Furthermore he aided fugitive slaves by employing them as caterers in his business.  Among those he assisted were the famous couple, Ellen and William Craft.  Additionally, through entertainments at Harvard College he amassed large sums, which enabled him to extravagantly cater for a host of anti-slavery events.  A few of these events include meetings of the Massachusetts Female Anti-Slavery Society, the Twentieth Anniversary of the Liberator, (January 24, 1851) and the issuance of the Emancipation Proclamation (September 22, 1862 and January 1, 1863).

Toward the end of his catering career Smith encountered financial hardship and eventual bankruptcy.  On July 26, 1861 Smith presented a bill of $40,378 to Governor John Andrew for services rendered over a ninety-three day period to the 12th Massachusetts Regiment of Volunteers.  Governor Andrew however, refused to pay the bill, stating that the state legislature had failed to appropriate the funds with which he could legally pay it.  Curiously, all other catering bills were paid for by Governor Andrew in advance of later reimbursement by the state legislature.

Although Smith eventually did receive a nominal portion of his fee, he filed suit on May 24, 1879 against the Commonwealth of Massachusetts for the unpaid balance of $16,617.20.  However, his unsuccessful suit only served to mount up additional debt through legal expenses.

Smith participated in numerous social and political activities over the course of his life, including representing Cambridge in the state legislature from 1873 to 1874.  During his time in the legislature he served as the chairman of the Committee on Foreign Relations.  Additionally, Smith was the first African American member (October, 1867) of the Saint Andrew’s Lodge of Freemasons of Massachusetts, where he served as the junior warden of the Adephi Lodge of South Boston.