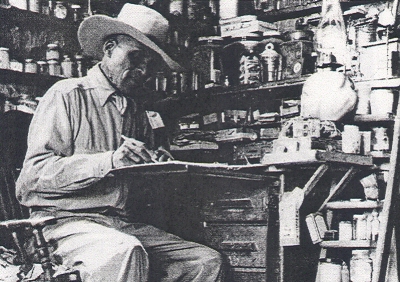 Island Smith was a celebrated African Creek native healer (or root doctor) who practiced his art in the hinterlands southwest of Okmulgee in the years after Oklahoma statehood. Smith was born outside of Taft, Oklahoma in 1877 to Hannah (later Robinson) and Isaac Smith. His father died when Smith was a small boy and his mother remarried. The family moved to the area southwest of Okmulgee where they operated a small subsistence ranch/farm in the years before allotment. Smith recalled that the family cultivated about an acre of corn for home use and raised cattle, hogs, and horses. They also gathered wild foods and hunted deer, rabbit, squirrel, possum, and raccoon. With this lifestyle, Smith recalled that they “seldom had use for money in the early days [the 1880s and 1890s] and spent it as soon as we got it.” When the family needed flour, coffee, sugar, or other household items, they simply rounded up some hogs and sold them in Okmulgee.

Smith learned to identify and prepare roots and herbs and to administer them as medicines in the traditional Creek way, and after he was older he became known for his abilities as a native healer. Smith attributed his abilities to his mixed African-Indian heritage saying: “Cross blood means extra knowledge. I can take my cane (a hollow reed that channels a native healer’s energy and is used to administer herbal medicines) and blow it twice and do the same as a full-blood Creek doctor does in four times. Two bloods means two talents. Two bloods has more swifter solid good sense and I is one of them.”