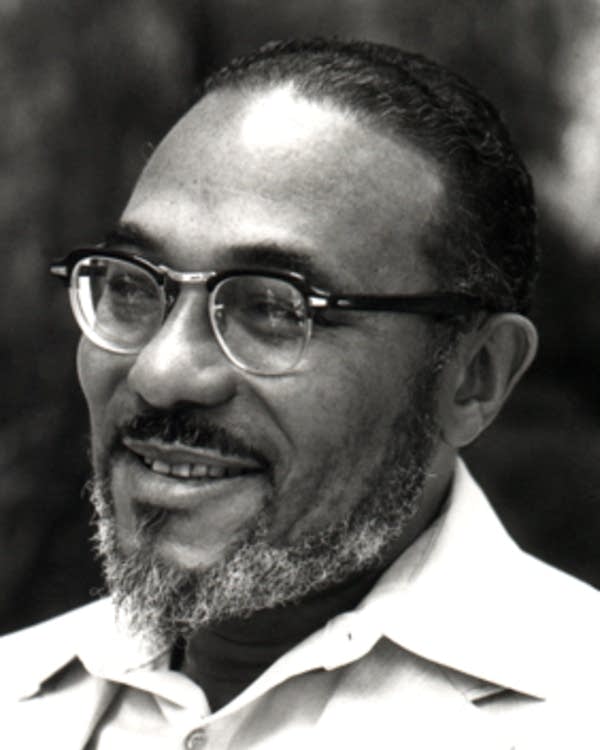 Performer, composer, arranger and teacher, Hale Smith, Jr., encompassed the worlds of jazz and classical music. Beginning with his childhood in Cleveland, Ohio, he trained in jazz and classical composition, performance, and teaching. His collaborations and influence crossed multiple fields where he set out to resolve the paradoxes of both improvisation and notated music.

Hale Smith, Jr. was born June 29, 1925 in Cleveland, Ohio to parents Hale and Jimmie Smith.  Beginning piano at age seven, he was introduced to composing and collecting musical scores. His father owned a printing business and his parents were highly supportive. By high school he was playing jazz piano and composing. One of his early compositions was encouraged by Duke Ellington.

After military service in World War II (1943-45) he received a B.A. degree (1950) and M.A. (1952) from the Cleveland Institute of Music. Smith’s first opera, Blood Wedding, premiered in Cleveland in 1953.  Moving to New York in 1958, he became an editor, advisor, and copyright consultant for several publishing houses. In 1960 he received a commission from BMI (Broadcast Music, Inc.), one of the major music licensing and performing rights companies, for his work Contours for Orchestra. He also taught at C.W. Post College on Long Island, New York until 1970.

Smith performed as a jazz pianist and arranger in New York. He worked with prominent jazz artists, including Chico Hamilton, Dizzy Gillespie, Eric Dolphy, Randy Weston, Melba Liston, Ahmad Jamal, and Oliver Nelson among many others. His influence was also felt as his students and colleagues mingled in the blending of jazz and classical ventures.

In 1970 Smith became a professor of Music at the University of Connecticut, where he taught until he retired in 1984.  During this period composing classical music became paramount with solo pieces, duos, chamber ensembles, choir, and incidental music. Among his compositions are In Memoriam, Beryl Rubinstein (1953), Faces of Jazz (1965), and Innerflexions (1977), all for the New York Philharmonic Orchestra.  In 1979 he wrote Toussaint L’Ouverture followed in 1985 by Three Patterson Lyrics for soprano and piano and Dialogues and Commentaries (1990-91). His arrangements of spirituals were favorites of Kathleen Battle and Jessye Norman.

In 1973 Smith became the first African American to receive the Cleveland Art Prize in Music. Other awards included an honorary doctorate degree from the Cleveland Institute of Music, serving on the New York State Council on the Arts from 1993 to 1997 and service on the boards of several composers’ organizations. In 2001 Smith was awarded the American Music Center’s Letter of Distinction.

Hale Smith died on November 24, 2009 from complications related to a stroke.  He was 84.  Surviving were Juanita Smith, his wife of 61 years, four children, and three grandchildren.