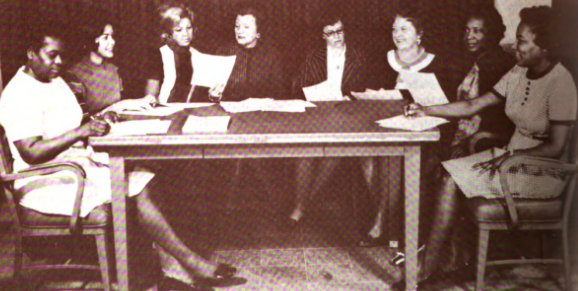 An accomplished mathematician, Eunice Gray Smith was among the first African American women hired to work at the Langley Memorial Aeronautical Laboratory (LMAL) in Hampton, Virginia during the 1940s. Over the course of a forty-year career at the laboratory and research center, which is part of National Aeronautics and Space Administration (NASA), Smith made important contributions to the fields of aeronautical and aerospace engineering.

Born on Dec. 31, 1923, Smith was the youngest of seven children. Her parents, Eugene Gray and Ethel Harris Gray, raised their large family in the community of Portsmouth, Virginia. Eugene Gray worked at the massive Norfolk Navy Yard as a watertender (WT) a position that required him to manage the boilers in steam-powered ships.

Smith attended Portsmouth public schools, which were segregated, and graduated from I.C. Norcum High School, the city’s first secondary school for African American students. She then continued her education at Hampton Institute (now Hampton University) in Hampton, Virginia. She graduated in 1944 with a degree in mathematics. Shortly afterwards, Smith began work at the Langley Memorial Aeronautical Laboratory (LMAL), which was then the primary research center for the National Advisory Committee for Aeronautics, the precursor to the National Aeronautics and Space Administration, better known as NASA.

In the 1930s, LMAL had begun to hire women to serve as “computers” to complete complex mathematical calculations by hand. Over the next several decades, hundreds of women would be employed at the laboratory in this capacity, playing a critical role in advancing aeronautical and aerospace research first during World War II and later the Cold War and its iconic space race.

African American women, including Eunice Gray Smith, began to be hired to work as mathematicians at LMAL during the 1940s. Despite doing the same type of work as their white counterparts, lab management clustered the black women in a segregated area of the facility, known as “West Area Computers.” Professional advancement was more limited for these black mathematicians and engineers, who, especially during the early decades, also faced discrimination in social spaces in the lab like the dining and restroom facilities.

Smith lived through dramatic changes in the treatment of women and people of color at NACA and then NASA. She enjoyed a long and successful tenure at the agency, working at Langley for forty years (1944–1984). Over the course of her career, she contributed to numerous studies, co-authoring articles on subjects as varied as aircraft antiskid braking systems, the use of photographic evidence for aeronautic research, aircraft tire behavior during high-speed operations, and more. Beginning in the 1970s, she also served on a Federal Women’s Advisory Committee at Langley focused on gender equity issues.

Smith was an active parishioner of Carver Memorial Presbyterian Church in Newport News, Virginia, volunteering on numerous boards and committees. She was also a member of the Lambda Omega chapter of Alpha Kappa Alpha Sorority and the National Technical Association.

Her marriage to A. Wade Smith ended in divorce. The couple had one son, the late Dr. Aaron Wade Smith, a well-respected sociologist of race and race relations at Arizona State University. Smith passed away on June 19, 2006, in Newport News, Virginia at the age of 82.