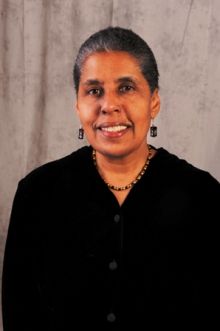 Beginning in the 1970s, Barbara Smith broke new ground as a black feminist, lesbian, activist, author, and book publisher of women of color.  She and her twin sister, Beverly Smith, were born on December 16, 1946 in Cleveland, Ohio.  Their mother, Hilda Smith, maternal grandmother, and a great aunt raised the girls there.  Smith’s activism started in high school when she participated in boycotts, marches and civil rights protests in the 1960s.

Education remained a high priority in the household.  As the first member of the Smith family to graduate from college, their mother Hilda expected the twins to do likewise.  She died when the twins were nine years old, and consequently Smith’s grandmother and aunt continued to stress the importance of learning and education.  Barbara Smith earned her B.A. from Mount Holyoke College in 1969 and her MA in 1971 from University of Pittsburgh.  She completed all but the dissertation (ABD) in her doctoral studies at the University of Connecticut (1981).

Smith co-founded the Combahee River Collective in Boston, Massachusetts in 1974.  The organization was best known for its Combahee River Collective Statement (1977), which she co-authored with her twin, Beverly, and with Demita Frazier.  This document became one of the earliest explorations of the intersection of multiple oppressions, including racism and heterosexism, critiquing both sexual oppression in the black community and racism within the wider feminist movement.  For the first time, according to the Statement, black women openly and unapologetically communicated their sexual orientations in the midst of their social justice work.

The Collective disbanded in 1980.  Around this time, Smith realized that very few publishing opportunities existed for female scholars of color.  She and colleagues founded Kitchen Table: Women of Color Press in 1980, the first U.S. publisher of books for women of color.  One of the books edited by Smith, Home Girls: A Black Feminist Anthology (1983), broke new literary ground by integrating black lesbian voices with those of other black women.  Kitchen Table’s success spurred the mainstream press to begin publishing these scholars.

Smith taught her first class on black women’s literature in 1973 at Emerson College.  She has been visiting professor, writer in residence, freelance writer, and lecturer at numerous other universities and research institutions, including Schomburg Center for Research in Black Culture (1995-1996).  She entered politics in the early 21st century and was elected to the Albany, New York Common Council (city council) in 2005, where she focused on community efforts to prevent youth violence.

Among other honors, Smith received the Stonewall Award for Service to the Lesbian and Gay Community (1994). She was also nominated for a Nobel Peace Prize in 2005.