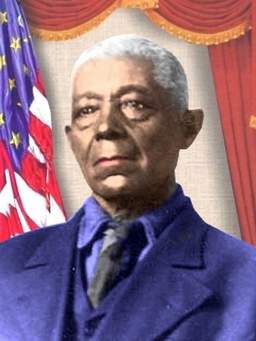 Andrew Jackson Smith was the last black Civil War soldier to receive a Medal of Honor. Smith was born on September 3, 1843, into slavery to Susan, an enslaved African American woman, and her white owner, Elijah Smith, in Lyon County, Kentucky. When his father enlisted in the Confederate army, intending to bring Smith along as a servant, Andrew and another slave ran away. After walking 25 miles through the rain, they arrived at a Union army encampment in Smithland, Kentucky. They were admitted to the camp, and Smith, in order to remain under the military’s protection, became a servant to Major John Warner of the 41st Illinois Volunteer Regiment.

During his time with the 41st Illinois, Smith witnessed the battle of Shiloh and sustained a minor injury from a spent bullet. In 1862, while on a furlough in Illinois with Major Warner, he learned of President Lincoln’s decision allowing black men to fight for the Union once the Emancipation Proclamation took effect on January 1, 1863. Subsequently, he left the relative safety of Illinois, a free state, and enlisted with the 55th Massachusetts Colored Volunteers who would soon be sent south to the fighting.

On November 30, 1864, as part of the Savannah Campaign led by General William T. Sherman, the 55th and other Union regiments engaged Confederate forces at Honey Hill in South Carolina. When an exploding shell killed his unit’s color bearer, Smith picked up the battle flags and carried them for the rest of the battle. Despite a high casualty rate in the battle, which ended in a defeat for Union troops, he willingly exposed himself to enemy fire by carrying the flags. Later, he was promoted to color sergeant.

After the war, Andrew Smith moved to Eddyville, Kentucky, where he purchased land. Dr. Burt G. Wilder, the 55th Massachusetts’s surgeon, undertook efforts in the following years to get Smith recognition for his bravery at Honey Hill. In 1916, Smith, then 73, was nominated for the Medal of Honor; however, the nomination was denied due to a lack of official reports about his actions. Likely due to suffering an injury early in the battle, the regimental commander had not mentioned Smith’s heroism in the battle report. On March 4, 1932, Andrew Jackson Smith passed away in Eddyville, Kentucky.

In 2001, 137 years after the Battle of Honey Hill, President Bill Clinton presented a posthumous Congressional Medal of Honor to Andrew Jackson Smith’s descendants in an official ceremony at the White House.