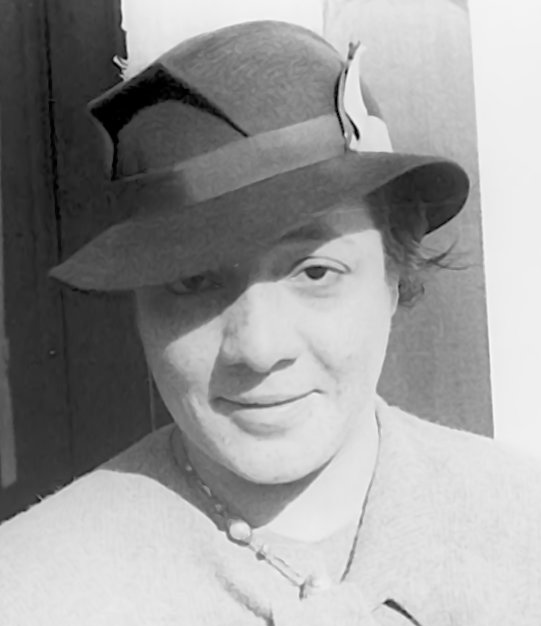 Ada Beatrice Queen Victoria Louise Virginia Smith (“Bricktop”), vaudevillian actress, singer, nightclub owner, and international celebrity host, was born August 14, 1894 in Alderson, West Virginia, to Thomas and Hattie Thompson Smith. Her father passed away in 1898 and Mrs. Smith moved Ada and her three older siblings to Chicago, where her mother managed rooming houses and worked as a maid. Smith began performing at the age of five, playing Harry in Uncle Tom’s Cabin at Haymarket Theater in Chicago. By age 14 Smith earned a permanent chorus role at the Pekin Theatre. A truancy officer tracked her down, however, and she was forced to quit performing and return to school.

At age 16 Smith began touring with the Theater Owners’ Booking Association (TOBA) and Pantages vaudeville circuits. The young performer appeared alongside vaudevillian entertainers such as Miller and Lyles and the Kinky-Doo Trio. It was during this time that she earned the nickname “Bricktop” which referred to her bright red hair and freckles. Throughout her twenties Smith performed in a wide variety of locations including Chicago, San Francisco, Vancouver, and New York. Baron’s Exclusive Club in Harlem became one of her regular venues and during her time there she convinced the owner to hire Elmer Snowden’s Washingtonian’s band, which included an undiscovered Duke Ellington.

Smith first performed in Paris, France in 1924 at the Le Grand Duc nightclub. It was at this time she began hosting and entertaining at charity events and parties for celebrities, where she befriended influential artists such as the authors F. Scott Fitzgerald and John Steinbeck, and the composer and musician Cole Porter. Porter wrote a song for Smith titled, “Miss Otis Regrets She’s Unable to Lunch Today.” In 1926 Smith became more involved with the Paris nightclub scene, regularly performing at The Music Box and Le Grand Duc.

Smith opened her own nightclub called Chez Bricktop’s in 1926.  The club regularly featured high profile guests and performers such as Jascha Heifetz, Noel Coward, Duke Ellington, the Prince of Wales, Paul Robeson, and Josephine Baker with whom she became good friends.  Smith, known for smoking her signature cigars, became known in Paris as the “doyenne of café society.”

In 1929 Smith married New Orleans musician Peter Conge and moved her nightclub to 66 Rue Pigalle, where singer Mabel Mercer became the main attraction. The nightclub thrived through most of the 1930s.  In 1932 Smith separated from her husband, although they were never officially divorced. From 1938 to 1939 Smith she made radio broadcasts for the French government. However, as World War II approached Smith decided to return to New York, where she attempted unsuccessfully to recreate her nightclub enterprise.

Between 1943 and 1951 Smith returned to international travel and opened and closed nightclubs in Mexico City, Paris, and Rome but none were as successful as her original Paris nightclub. In 1972 Smith recorded her first and only song, “So Long Baby” with jazz artist Cy Coleman. She continued to entertain in nightclubs and at charity events into the early 1980s.  Ada “Bricktop” Smith died on January 31, 1984, in New York City at the age of 90.