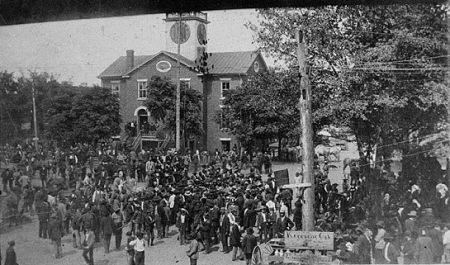 In the following article Melissa Milewski, a graduate student in history at New York University, describes her research which has uncovered the surprising success of African American litigants in court cases in the post-Civil War South.

As slaves, black southerners were treated only as property to be bought or sold in civil cases.  Then, during the Civil War and Reconstruction, in a revolution that shook the nation, slaves were emancipated and black men granted the vote.  Yet another important transformation has been overlooked: black southerners’ increased access to state courts after the Civil War.  During Reconstruction, former slaves brought civil cases against their former masters in southern courts and frequently won these cases.  Although in many ways the revolutionary changes wrought by Reconstruction were short-lived, long after political Reconstruction had ended and white northerners turned a blind eye to the increasingly racist regimes of the U.S. South, black southerners continued their struggles in state courts.  Even as they lost a number of high profile suits dealing with racial discrimination, they frequently won seemingly prosaic civil suits over transactions, wills, and property.  Indeed, I found that black litigants won the majority of civil cases litigated against white southerners in higher state courts – not only during Reconstruction, but, astonishingly, during the post-Reconstruction and Jim Crow eras as well.  Through such cases, African Americans continued to exercise the legal rights gained during Reconstruction long after that revolutionary moment had ended.

Approximately half of the civil appellate suits I examined between 1865 and 1900 involved former slaves and the heirs of their former masters.  Such cases illuminate the interactions of black and white southerners who had known one another for years as their lives shifted around them.  At times, such cases continued suits litigated over master’s wills in the antebellum South.  In September 1853, for instance, three slaves, 28-year-old Eureline Pearre, 26-year-old John Pearre, and 25-year-old Mary Pearre, were brought to the office of the local court in Franklin, Tennessee.  At the courthouse, the clerk reminded them that their former master, who had died six years earlier, had directed the will’s executor to hire them out until January 1, 1854, at which time they were to be emancipated and sent to Liberia, if they desired to emigrate. The clerk later recalled that “they all expressed and declared the most unequivocal willingness and desire to be emancipated and sent to Liberia, as contemplated by said will.”  While a court clerk asked the Pearres whether they wanted to emigrate, the court did not respect their legal statement expressing a desire to go to Liberia.  Instead, the administrator of the estate retained possession of the emancipated slaves and hired them out in Tennessee until 1862.  After the Civil War, however, the formerly enslaved Pearres realized that they now had greater choices and a measure of legal power.  Choosing not to immigrate to Liberia, they instead brought a lawsuit in 1867 to recover the money they had earned during their continued enslavement after their master’s death.  In the end, the Pearres won a ruling in their favor from the Tennessee Supreme Court

In addition to suits over wills, many of the appellate civil cases involving black and white litigants in the three and a half decades after the Civil War revolved around disputes over economic dealings, including property and contract suits.  Former slaves challenged their former masters and other whites in court and demanded fair payment and equal treatment from whites.  In 1873, for example, a black Georgia sharecropper named Moses Summerlin brought a case against a white landowner, William Smith.  Summerlin explained in his testimony that Smith refused to pay him his portion of the crop, justifying himself with the claim that the sharecropper had produced only half of the crop he would have produced if he had worked more diligently.  Under slavery, an accusation of laziness would most likely have led to a beating for the accused slave, with no opportunity for an explanation.  Only a few short years later, freedpeople could now defend their actions in a court of law.  Summerlin’s boldness was rewarded by the courts, as the local court, and then the state supreme court, ruled in the black sharecropper’s favor.

At a time when white men dominated the legal process, almost half of black litigants in southern state supreme court cases between white and black litigants were women.  Court cases depict black women displaying knowledge and skill in dealing with the legal system and, even when they initially made mistakes, learning from those errors.  In these cases freedwomen fought for custody of their children, litigated over a property claim or the terms of a will, and faced off in court against the heirs of a former master who had sexually abused them.  In 1875, for example, Mary Gracie stood before a local Alabama court to answer a long series of invasive and humiliating questions regarding her relations with her former master.  Gracie’s white master had engaged in sexual relations with her while she was enslaved and she had given birth to a son as a result of this liaison.  After emancipation, Gracie arranged for her former master to buy a house and lot in Selma, Alabama, with her earnings as a seamstress as the owners did not want to sell to “coloreds.”  When her former master died, his creditors claimed the lot, arguing that her former master had given her the lot for her services as his “mistress.”  As a defendant in the ensuing law suit, Gracie fought to maintain ownership of the house and lot.  Gracie won her case in the lower court, but lost in the Alabama Supreme Court.

As a result of the increased segregation and rising violence in the Jim Crow South, the types of civil cases between whites and blacks that reached state supreme courts shifted in the first two decades of the twentieth century.  In contrast to civil suits in the decades immediately after the Civil War which had often involved wills, property claims or economic transactions, many of the civil cases heard by the southern appellate courts between 1900 and 1920 involved claims of fraud or personal injury.  Yet even as black southerners’ political rights became increasingly constricted, their continued ability to bring cases to court to protest bodily injuries or financial harm showed that they would continue to fight for their rights.  In a 1910 Kentucky case, for example, a black woman, Rebecca Sallee, sued the city of Harrodsburg.  In doing so, Sallee took on the the mayor of Harrodsburg, whom she worked for as a domestic employee.  In her testimony, the 48-year-old mother of 16 children explained that she had been on her way to a prayer meeting when she fell into a gaping hole in the public sidewalk.  After incurring significant medical expenses from her injuries, she brought a suit against the city, asking for $1,500 in damages for “great bodily pain and mental anguish.”  Her employer, the city’s mayor, testified against her, although she remained in his employ at the time of the case.  Sallee, however, won her suit in both the local and state supreme courts, and recovered $300 in damages.

As these examples illustrate, black litigants not only brought civil cases against white southerners in the highest level of southern courts throughout the period of 1865 to 1920, they often won these cases.  Between 1865 and 1920, I found that black southerners won the majority of civil cases against white litigants in the highest courts of eight southern states during Reconstruction.  More surprising, black southerners’ continued to win most of their cases between 1880 and 1920 despite the onset of segregation and Jim Crow laws.  Black litigants won in higher court civil cases between 1900 and 1920 at roughly the same rate as in the earlier years immediately after the Civil War.

The nature of the legal system and the varied actions of its participants played an important part in African Americans’ access to southern courts, while also shaping and limiting the kinds of cases litigated by African Americans. In particular, judges’ reliance on precedent and the legal system’s conservative nature facilitated many of these suits even as it favored certain types of cases over others. Black litigants also encountered a wide variety of responses from white southerners when they entered the courtroom. Some white witnesses, jury members, lawyers, and judges testified for black litigants, made persuasive arguments for black clients, decided in their favor on juries, or overturned lower court rulings against African Americans. At the same time, other white courtroom participants worked to obstruct or prevent black litigants’ cases. African Americans also played a key role in their own and other black people’s suits as they turned to the courts in disputes with white southerners, demonstrated legal knowledge and a keen understanding of race relations in their communities, and used their long-term relations with whites in the community to obtain valuable witnesses and support for their cases. In many cases, African Americans’ experiences during slavery played an important role in their suits, as black litigants drew on their antebellum connections with local whites to gain witnesses and testified about events that occurred while they were slaves.

Although black litigants’ civil cases in the half century after the Civil War did not stem the tide of segregation and disfranchisement, they allowed individual white and black southerners to confront and work out their shifting relations with each other in a court of law. Moreover, they kept alive the hope that racial progress could be achieved through the courts. Many black southerners maintained this view of the courts as an avenue for justice, leading to the series of important court decisions in the 1950s and 1960s that encouraged the civil rights movement and opened the way for economic and political progress for African Americans.

My conclusions are drawn from an analysis of over 600 State Supreme
Court cases involving African American litigants in eight southern
states (Georgia, Mississippi, Arkansas, Alabama, North Carolina,
Virginia, Kentucky, Tennessee) between 1865 and 1920.  A more in-depth
look at this research can be seen in my forthcoming dissertation:
Melissa Milewski, From Slave to Litigant: African Americans in Court in
the Post-war South, 1865-1920 (New York University, 2011).