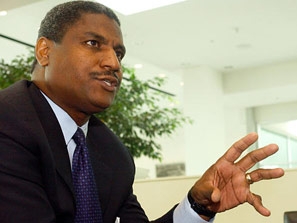 Rodney E. Slater, former cabinet member, attorney, and state government official, was born in Marianna, Arkansas, on February 23, 1955.  In 1977, Slater graduated from Eastern Michigan University. He earned his law degree in 1980 from the University of Arkansas.

In 1980, Slater became the Assistant Attorney General for the litigation division for Arkansas’s Attorney General’s Office.  From 1983 to 1987, Slater served as Arkansas Governor Bill Clinton’s executive assistant for Economic and Community Programs and then as the Special Assistant for Community and Minority Affairs.  In 1987, Clinton appointed Slater to the Arkansas Highway Commission.  Slater also held other positions in the state of Arkansas such as Director of Governmental Relations at Arkansas State University and was a special liaison for the Martin Luther King, Jr. Federal Holiday Commission.

In 1993, President Bill Clinton appointed Slater as the Administrator of the Federal Highway Administration.   Slater’s effectiveness in that position catapulted him into the position of Secretary of Transportation in 1997.  As Secretary, he oversaw transportation projects between federal and state governments.

In June of 2001, Slater joined the private sector as a director of the Kansas City Southern, Inc, a major interstate railroad.  Slater also became a partner in the public policy practice group of a leading Washington, D.C. law firm, Patton Boggs LLP.  While there he concentrated on transportation law. Slater is a member of Sigma Pi Phi Fraternity.

Slater has received numerous honors such as an honorary doctorate from Howard University, the Albert Schweitzer Leadership Award from the Hugh O’Brian Leadership Foundation, the Lamplighter Award for Public Service from The Black Leadership Forum, and the Trailblazer Award from Alpha Kappa Alpha Sorority.  In 1998, he also received awards from The Congressional Black Caucus; Ebony Magazine, The National Bar Association, and The Arkansas Times.

In 2006, Slater belonged to a group of investors that purchased the Washington Nationals, the Major League baseball team for Washington, D.C. They were formerly the Montreal Expos.  Slater and his wife, Cassandra Wilkins, have a daughter, Bridgette Josette.