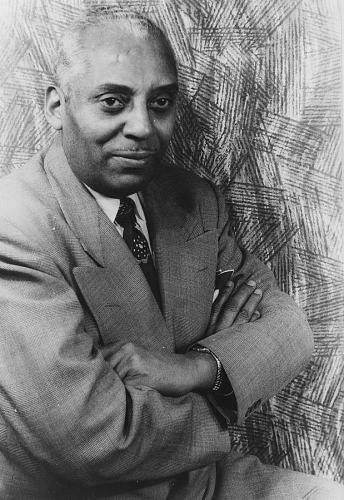 On July 10, 1889, the musician and lyricist, Noble Sissle, was born in Indianapolis, Indiana.  His father, a minister and organist, shared his passion for music with his son.  In 1906, the family moved to Cleveland where young Sissle sang on a vaudeville circuit.   In 1915, he moved to Baltimore where he joined Joe Porter’s Serenaders and met his songwriting partner, Eubie Blake.  Their first song together, It’s All Your Fault, was performed by Sophie Tucker and netted them $200.

In 1916, Sissle performed with Harlem’s James Reese Europe band but when war broke out in 1917, Sissle and Europe enlisted in the U.S. Army and were assigned to the 369th Infantry Regiment (The Harlem Hellfighters) and formed a military band.  During training in North Carolina, a white man attacked Sissle. To calm tensions, the military transferred the 369th to France where they were the first black regiment to see combat.  Sissle’s all-black regiment performed admirably and its regimental band, led by Lt. James Reese Europe, became particularly popular in France.  After the war, the two men rejoined Blake and attempted to revive African American theatrical shows.  After Lt. Europe was murdered in 1919, Sissle and Blake formed “The Dixie Duo” performing on stage without blackface.  Among their hit songs in vaudeville was Gee; I’m Glad I’m From Dixie.

In 1920, Sissle and Blake met Flournoy Miller and Aubrey Lyles.  In 1921, the four men pooled their resources to write, direct, manage, and star in Shuffle Along, the first all-black musical to become a box office hit.  On opening night, Blake was on stage playing,  Love Will Find A Way, while his partners stood near the door ready to flee if the theater erupted in violence at the suggestion of romantic love between a black actor and actress.  Unexpectedly, the song was well received and the longstanding theater taboo was finally broken.  The show’s most popular song was written as a waltz, but the singer disliked the tempo so Sissle revised it into the hit, I’m Just Wild About Harry.

In 1925, Sissle and Blake toured Europe but parted ways when Blake wanted to return to America.  Sissle remained in Europe where he encountered various musicians and songwriters including Cole Porter and Fred Waring.  Sissle once performed with the Prince of Wales who was guest drummer at a London concert.   In the 1930s, Sissle returned to America and founded the Negro Actors’ Guild.  Noble Sissle became the honorary mayor of Harlem in 1950 and played at President Dwight D. Eisenhower’s inauguration in 1953.

In the 1960s Sissle held a number of occupations: he was a disc jockey, ran his own publishing company, and owned a nightclub.  Repeated muggings caused him to retire to Florida.   In 1968, he and Blake recorded, “86 Years of Eubie Blake.”  Noble Sissle, a member of Alpha Phi Alpha Fraternity, died on December 17, 1975.