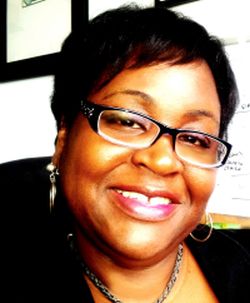 Yalonda Sinde was born in Seattle Washington to working-class parents.  Her father was a steward with Amtrak for many years and her late mother was a hairdresser.  She is the oldest of three sisters.  Sinde’s father inspired much of her activism.  “Watching what my father endured as a black man in the 1960’s and 1970’s as a kid, I learned to stand up for what is right.  My dad, like many black men endured a lot of racial harassment on the job, and he dealt with it so he could feed his family.”  Sinde graduated from Renton High School in 1982 and credits her parents for instilling good values of hard work and caring for community.

Sinde became an active participant in the environmental justice movement in 1993 after attending a Community Coalition for Environmental Justice (CCEJ) conference about environmental issues in Seattle.  After the conference she became an active member of the CCEJ and eventually was a founding board member.  Sinde served on the board for three years before becoming the Executive Director.  Under her Leadership, CCEJ grew to become the largest and one of the most influential environmental justice groups in the Pacific Northwest.  The organization grew from one staff member to a team of five full time staff and a number of interns and volunteers over the years.  She also helped CCEJ create numerous alliances with affected communities not only in Seattle, but across the northwest and throughout the United States.

With Sinde at the helm, CCEJ achieved two major environmental justice victories.  First in 1998, the organization led a successful campaign to stop the placement of a medical waste incineration at the VA Hospital Medical Center in South Seattle.  In 2001 South Park (Seattle) residents with CCEJ’s support, successfully eliminated toxic paint fume emissions from a neighborhood paint coatings operation.  Other major accomplishments include promoting pipeline safety and supporting the passage of the Washington State Environmental Justice Act in 2002, mentoring the development of new youth environmental justice leaders, and educating thousands of people in Seattle and the Pacific Northwest about environmental justice issues at numerous conferences, workshops and events.

Yalonda Sinde is best known for her eloquent speeches, strong leadership and activism on issues impacting poor people.  Through her work, CCEJ has built a successful multi-racial, multi-lingual community coalition in Seattle dedicated to environmental justice.