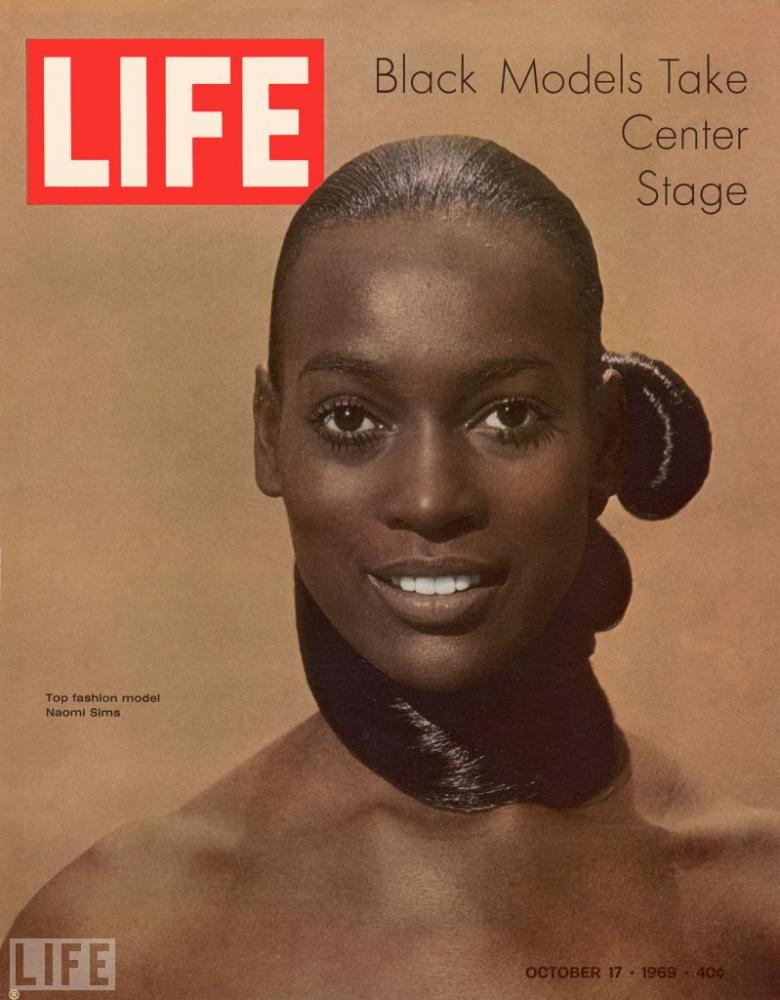 Sims was born in Oxford, Mississippi, the youngest of three daughters, to John and Elizabeth Sims. Her parents divorced shortly after she was born. Elizabeth Sims moved her family to Pittsburgh, Pennsylvania, but shortly after their arrival, she became ill and children were placed in foster care. Naomi, by her freshman year in high school, was 5’10” and became a target of bullying over her unusual height by her classmates when she began attending Westinghouse High School.

After high school, Sims attended college after winning a scholarship to the Fashion Institute of Technology in New York City, New York. She studied textiles and management at the institute and took night classes in psychology at New York University beginning in 1966. Sims had a difficult time getting modeling work through established agencies because of racial prejudice. Even some agencies told her that her skin was too dark for modeling. Sims’s breakthrough finally came after she decided to leave agencies and go directly to fashion photographers.  One photographer, Gosta Peterson, agreed to photograph her for the cover of the paper’s August 1967 fashion supplement.

Despite this success, Sims still found it hard to get work until she approached Wilhelmina Cooper, a former Dutch model, who was starting her own agency called Wilhelmina Models. Cooper agreed to promote Sims. In 1968 at the age of twenty, Sims was selected for a national television campaign for AT&T, wearing clothes by designer Bill Blass. Sims would quickly become one of the first successful black models, achieving worldwide recognition by 1970. Sims, for example, appeared on the cover of the October 17, 1969, issue of Life magazine, the first black model to achieve this distinction.

By 1972 Hollywood had taken an interest in twenty-four-year-old Sims as a potential actress and offered her the title role in the movie Cleopatra Jones.  Sims read the script and turned down the role because of the way it portrayed blacks in the film. Another actress, Tamara Dodson, took the role. Sims retired from modeling in 1973 at the age of twenty-five to start her own business. She created a successful wig collection that expanded into a multimillion dollar beauty empire, including five books on modeling and beauty. The most prominent were All About Health and Beauty for the Black Woman, How to be a Top Model, and All About Success for the Black Woman, as well as an advice column for teenage girls in Right On! Magazine.

Sims married New York art dealer Michael Findlay in August 1973. The union caused some controversy because it was interracial. The couple had one son, Bob Findlay. They divorced in 1991. Soon afterward, Sims became one of the first major celebrities to announce that she had bipolar disorder.

Naomi Sims died of breast cancer on August 1, 2009, at sixty-one in Newark, New Jersey. She was survived by her son, Bob Findlay, a granddaughter, and her elder sister, Betty Sims.