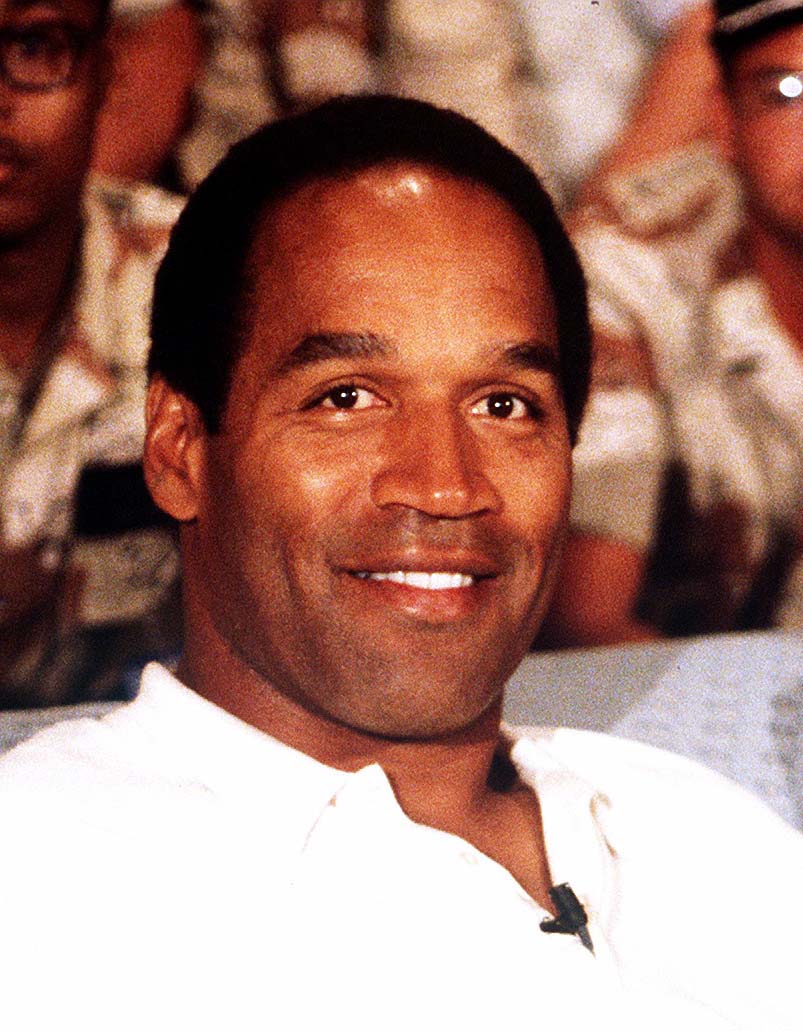 Orenthal James Simpson was born July 9, 1947, in San Francisco, California. A troubled youth, poor grades and violent behavior kept Simpson from earning any college scholarship offers while attending high school. Simpson was highly recruited, however, after breaking several junior college records, and he would earn a scholarship to the University of Southern California.

In his second season at USC, Simpson set NCAA records for rushing yards in a season (1709) and carries (355) on his way to winning the national championship. Simpson won the 1968 Heisman Trophy by the largest voting margin ever.

The Buffalo Bills selected Simpson as the number one overall pick in the 1969 NFL draft. The first three NFL seasons were uneventful for the young Simpson, as coaches were hesitant to make Simpson a star. Beginning in 1972, however, Simpson’s abilities would not be ignored, as he led the league in rushing for four out of five seasons from 1972-1976. In 1973 Simpson won the NFL Most Valuable Player award while breaking the record for rushing yards in a season with 2003, and he remains the only player to rush for over 2000 yards in a fourteen game season.  After he retired from professional football Simpson pursued a moderately successful acting career.

On June 12, 1994, Simpson’s wife Nicole Brown Simpson and her friend Ronald Goldman were found murdered.  Simpson emerged as a leading suspect.  Five days later on June 17, approximately 95 million people worldwide watched live television footage of Simpson threatening suicide in a Ford Bronco SUV driven by his friend Al Cowlings while being pursued in a “low-speed” two hour chase by Los Angeles police.  Simpson was arrested at his home and charged with both murders, to which he pleaded “Absolutely, positively, 100 percent not guilty” in what would become the most publicized trial of the 1990s. On October 3, 1995, Simpson was acquitted of both charges, although he was later found liable and required to pay 33.5 million dollars in compensatory and punitive damages.

Simpson ignited controversy again when in late 2006 he penned a book entitled If I Did It in which he described in detail how he would have murdered his wife and Goldman, along with a number of other people, if he were so inclined. Fox Publishing, the scheduled publisher, terminated the controversial project following widespread public outrage over the book deal.