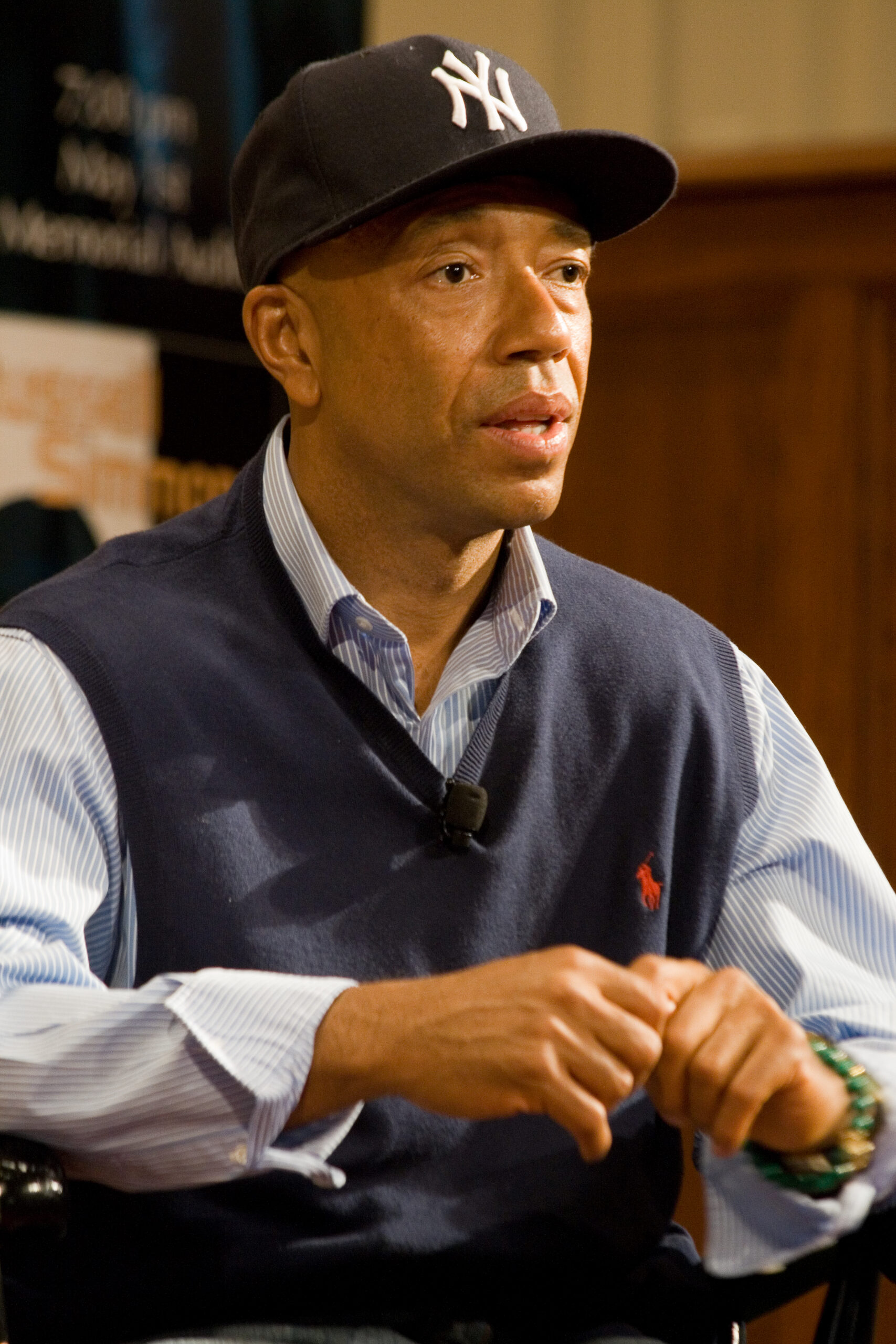 Russell Simmons, a multimillionaire who is estimated to be the third wealthiest man in the Hip-Hop industry, just behind Jay-Z and Sean “Diddy” Combs, was born on October 4, 1957 in Queens, New York City.  His parents were Damian Simmons, a public school administrator, and Evelyn Simmons, a New York City park administrator.  Simmons is one of four brothers.  While growing up he lived a life of poverty as his block in Queens was known at that time as the area’s drug capitol. Even Simmons himself became involved with dealing marijuana in his early youth.

Simmons first became involved with hip hop music at the age of 20 when in 1977 he attended a party in a small club where an MC (Master of Ceremonies) was shouting call-and-response rhymes. Inspired by that experience, Simmons began promoting MCs, like the one from the former party, and booking them for shows.  Although he lacked musical talent, Simmons felt his promotions were a way to become involved in the industry.  Simmons often lost money on these early promotions but he continued to work on building successful acts and his own career.

Simmons’ first major success came in 1981 when he promoted the early hip hop group, Run D.M.C. which featured his brother, Joey Simmons, who was “Run” in the group.  The group became the first hip hop act to be considered major stars.  Under Russell Simmons’ management they were credited with moving hip hop beyond the mostly black audiences in U.S. urban areas.  In 2007 MTV named Run D.M.C. the “Greatest Hip Hop Group of All Time,” and two years later they were inducted into the Rock and Roll Hall of Fame.

Using the success of Run D.M.C. as a model, Simmons joined forces with Rick Rubin in 1984 to found Def Jam Records. Together they made Def Jam Records one of the most successful labels of all time. Talents such as LL Cool J and the Beastie Boys were among the first to sign with the label. In 1999, Simmons bought out Rubin in a deal reported to be worth an estimated $120 million.

Simmons also developed other major business interests based on the growing popularity of hip hop music and “culture” including Broadway and television productions.  He founded Rush Communications in 1994 which became the parent corporation of numerous enterprises including Def Comedy Jam, Def Poetry Jam, Phat Fashions, and Run Athletics. He is also the majority shareholder in the Hip Hop website, www.GlobalGrind.com.  Altogether, Simmons’ estimated worth was $340 million in 2007.

In 1992, Simmons met Kimora Lee during New York’s Fashion Week. Six years later he married the model and the couple had two daughters, Ming and Aoki Lee. Simmons and Lee divorced in 2009.

Today Simmons, known as the “Godfather of Hip Hop,” is a practicing Buddhist and vegetarian who continues his ventures in the entertainment and fashion businesses. He is also a leading philanthropist known primarily for his work on behalf of animal rights and environmental issues.  In May 2009 Simmons was appointed Goodwill Ambassador for the United Nations Slavery Memorial by UN Secretary-General Ban Ki-moon.