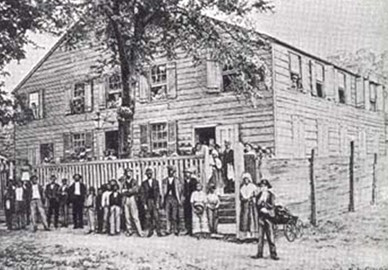 The first black Baptist congregation in South Carolina was formed in 1773 on the Galphin Plantation near Silver Bluff, 14 miles northwest of  Savannah, Georgia.  The church was founded jointly by Rev. Wait Palmer, a white Connecticut minister, and African American pastor, George Liele.  The first ordained, black minister in Georgia, Liele in turn baptized and trained David George, an enslaved trader owned by George Galphin.  Despite his enslaved status George evangelized among slaves on plantations all along the Savannah River between present-day Augusta and Savannah.  With David George as pastor, Galphin allowed his enslaved population to use an empty barn to worship.  That congregation that met in the barn eventually became the Silver Bluff Baptist Church.

In 1778, during the American Revolution when Galphin abandoned his plantation in the wake of the British advance, the Silver Bluff congregation fled to British lines in Savannah and joined the First Colored Baptist Church of Savannah which was established in December 1777 by Liele.  David George and George Liele along with hundreds of other blacks left Savannah for Nova Scotia during the British evacuation of Loyalists in July, 1782.  Eventually the remaining Silver Bluff congregation came under the spiritual leadership of Rev. Jesse Peter, an enslaved itinerate preacher from Augusta who periodically conducted services at Silver Bluff before agreeing to serve as its official minister between 1788 and 1793.

In 1793, the year he secured his freedom, Peter became pastor of the First African Baptist Church of Augusta, Georgia (presently the Springfield Baptist Church).  Begun in 1787, the Augusta church was officially organized by David Tinsley, a white pastor, in 1793.  Many historians argue that most of the Silver Bluff congregation transitioned into this new congregation, making the present-day Springfield Baptist Church one of the oldest continuously operating African American churches in the United States.