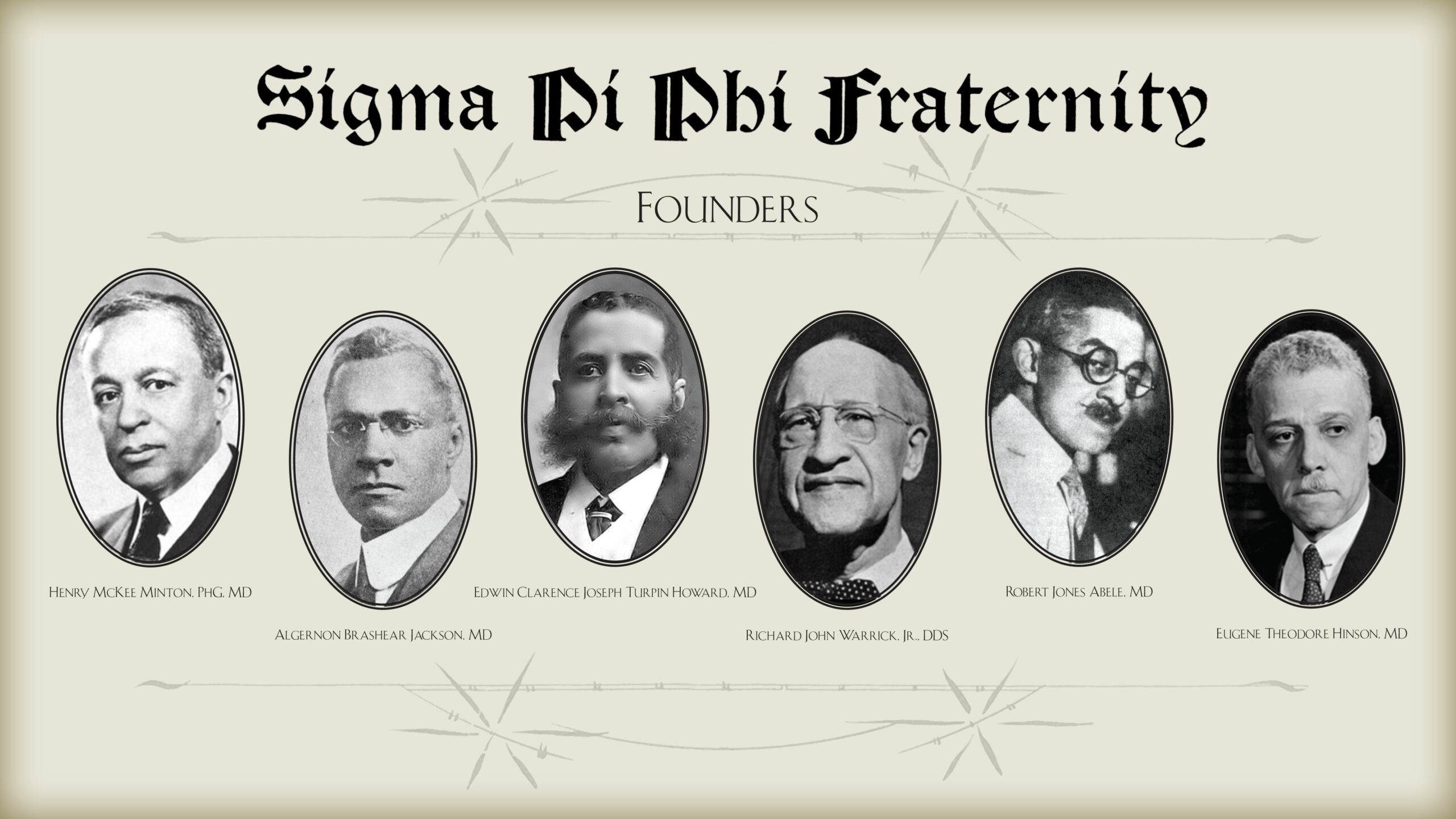 Founded on May 15, 1904, Sigma Pi Phi Fraternity, also known as the Boulé, which in Ancient Greece was a “Council of Chiefs,” is the oldest continuously existing Greek-letter post-graduate fraternity originally founded by, and primarily for, eminent black professional men and later similar professional men of African descent throughout the world. Its founders were six exceptional men, four medical doctors, one dentist and one pharmacist, who at that time was a second-year medical school student.

These men recognized the advantages of belonging to a special fraternity that would enhance and support professional careers and social relationships while simultaneously providing leadership and assistance to facilitate the enhancement and elevation of such underserved black communities as those from which they mostly came and in which they professionally existed.

They were: Henry McKee Minton, a registered pharmacist and second year student at Philadelphia, Pennsylvania’s Jefferson Medical School, Algernon B. Jackson, M.D., the first African American graduate of the Jefferson Medical School, Edwin Clarence Joseph Turpin Howard, M.D., who in 1869 was one of the first two black graduates of the Harvard Medical School, Richard John Warrick, D.D.S., a graduate of the Philadelphia School of Dental Surgery, Eugene Theodore Hinson, M.D., a graduate of the University of Pennsylvania School of Medicine, and Robert Jones Abele, M.D., the first black graduate of Philadelphia’s then Hahnemann Medical College, which is now Drexel University College of Medicine. The basic idea of the Fraternity was conceived by Henry M. Minton and was refined and enthusiastically supported by the other founders.

In its early years and throughout most of its existence, Sigma Pi Phi Fraternity was a quiet, secret organization. Today the Fraternity can be considered private and, as was the case during its early years of existence, it avoids self-perpetuating publicity. Yet, throughout its life, in addition to the personal strength derived from the camaraderie shared by its members, the fraternity has embraced and remains committed to enhancing and elevating black communities by striving to eliminate barriers therein to civic, social, political, educational, and economic well-being through its social action programs and public policy initiatives.

Growth of the fraternity since its founding has been deliberately slow as it was not conceived to be a large, indiscriminate body of men. Rather, the emphasis of membership has always been on quality, not quantity. Thus, membership in the fraternity was in the beginning, and continues to be, extended selectively to outstanding men who are, at a minimum, college graduates with recognized professional accomplishments and a record of demonstrable commitment to the enhancement of black communities and their members.

From an initial membership of six founders located in the city of Philadelphia, Pennsylvania, Sigma Pi Phi Fraternity has grown to presently include over 5,000 active members who are affiliated with 139 member boulés (chapters) located throughout the United States and in the Bahamas and the United Kingdom.

Throughout its existence its membership has included some of the most distinguished men in the world. They have included such scholars and academic, cultural, and civil rights leaders as W.E.B. DuBois, Carter G. Woodson, founder of the Association for the Study of African American Life and History (ASALH), Charles R. Drew, physician who developed blood plasma, James Weldon Johnson, author of Lift Every Voice and Sing (the Black National Anthem), L. Douglas Wilder, the first elected black governor of a U.S. state (Virginia), and Martin L. King, Jr., founder of the Southern Christian Leadership Conference (SCLC) and one of the most important 20th Century Civil Rights leaders.

A number of black U.S. Congressmen have been members of Sigma Pi Phi Fraternity including Charles B. Rangel (New York), Andrew J. Young, Jr. (Georgia), and later U.S. Ambassador to the United Nations and mayor of the city of Atlanta, Georgia, and James E. Clyburn (South Carolina), as well as two recently deceased members of Congress, Representatives John R. Lewis (Georgia) and Elijah E. Cummings (Maryland).  Other members of the fraternity have included John Hope Franklin, the most prominent black historian of the 20th Century, Daniel H. Williams, who in 1893 performed the first open heart surgery, Roy O. Wilkins, longtime Executive Director of the NAACP, Robert C. Weaver, who in 1966 became the first black American to serve in a U.S. Presidential Cabinet, Thomas J. (Tom) Bradley, the first black American mayor of the City of Los Angeles in the modern era, Paul R. Williams, a leading 20th Century architect who designed the iconic floating restaurant at the Los Angeles (now Tom Bradley) International Airport, Andrew F. Brimmer, Economist, who was the first black American to serve as a governor of the U.S. Federal Reserve System, and Samuel P. Massie, scientist, and J. Ernest Wilkins Jr., mathematician, who both worked on the World War II Manhattan Project that created the first atomic bomb. Both Wilkins and Massie later served as Grand Sire Archon (International President) of the Fraternity. Other members who were prominent scientists include Ernest E. Just, biologist and the first recipient of the NAACP’s Spingarn Medal, Percy L. Julian, a renowned chemist, and the noted theoretical statistician David H. Blackwell.

Sigma Pi Phi’s present membership continues to include an impressive list of leaders in a broad range of professional fields of endeavor including, but not limited to, education, law, medicine, science, economics, public service, civil rights, and the arts and humanities. Many of these members are profiled in BlackPast.org at https://www.blackpast.org/?s=%22Sigma+Pi+Phi%22.

Incorporated in Philadelphia, Pennsylvania in 1912, since 2004 Sigma Pi Fraternity has maintained its executive office in the city of Atlanta, Georgia which is managed by the fraternity’s Grand Grammateus, who also serves as its secretary.

Importantly, since 1912 the fraternity has published The Boulé Journal, that chronicles new and on-going social action and public policy programs and initiatives created and supported within the ranks of the fraternity, accomplishments of members and their families, articles pertaining to historical and contemporary issues, and tributes to its recently departed members and their spouses. It is distributed in print format and electronically to each of the fraternity’s active and Emeriti members and the widowed wives of former active and Emeriti members. It is also distributed complimentary to the libraries of Historically Black Colleges and Universities (HBCUs). The Journal is edited by an executive-level officer of the fraternity known as the Grand Grapter.

Sigma Pi Phi is unique among Greek-letter fraternities in that it regularly involves the wives of its members, who since 1925 are known as Archousai, in many of its activities.  Moreover, and significantly,  members of the fraternity take considerable pride in honoring the Archousai at various special events held throughout the year and especially during the Christmas season when special formal celebrations, affectionately known as “Christmas is for the Archousai,” are held. In addition, The Boulé Journal routinely highlights outstanding accomplishments of Archousai and immediate family members in its quarterly issues. Archousai also serve as elected members on the Board of Trustees of the Boulé Foundation which will be described in slightly more detail below.

The officers of Sigma Pi Phi Fraternity are elected or selected biennially. Its chief administrator or international president is known as the Grand Sire Archon, who serves in that capacity for a single term of two years. Similarly, other executive-level officers of the fraternity also carry the title “Grand” and, except for the Grand Sire Archon and two Grand Officers who are chosen by lot, may be re-elected.

The fraternity is organized into five regions whose officers are elected and selected biennially in a manner that replicates those at the Grand level and are known as regional officers, e.g., Regional Sire Archon. Similarly, each member boulé is governed by a set of local officers, whose titles mirror those at the Grand and regional levels but omit the inclusion of either Grand or regional, and whose jurisdiction encompasses only a local geographical area.

In 1980 the fraternity chartered the Boulé Foundation, a 501(c)(3) not-for-profit private foundation that is supported by voluntary contributions from its individual members and their wives. It is an independent entity within the fraternity and selectively provides funding for student scholarships and social action programs and policy initiatives. Together with contributions from the fraternity, the foundation has also provided financial support to programs and entities that address the broader common good, such as the Smithsonian Institute’s National Museum of African American History and Culture (NMAAHC). Further, to the extent possible and together with specific contributions from the fraternity’s members, it has provided financial assistance for victims of unforeseen calamities of nature such as Hurricane Katrina in 2005, which devastated the African American community in New Orleans, and the 2010 major earthquake in Haiti.

For over one-hundred years Sigma Pi Phi Fraternity has served to enhance and strengthen the bonds of fellowship and professional support within its ranks. Additionally, and importantly, is the fact that its members have provided and continue to provide leadership and assistance to establish, sustain, and improve essential resources for fulfillment and growth not only in local black communities, but also in selected communities throughout the African diaspora.

All photo images accompanying this article are used with the permission of the Sigma Pi Phi Fraternity Boulé Journal and should not be copied without express approval.