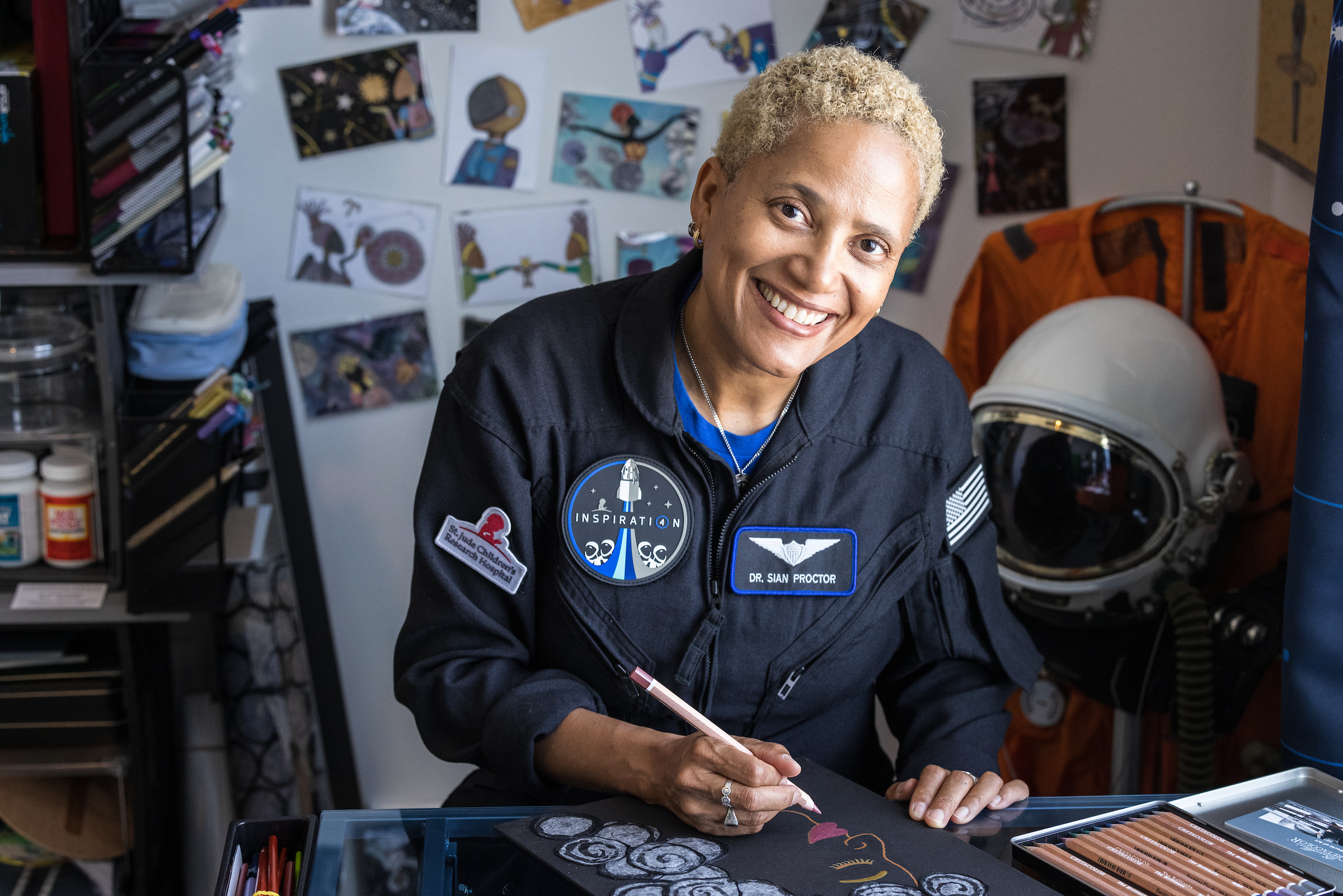 Sian Hayley Proctor is a geology professor, motivational speaker, pilot, artist, author, and spaceflight participant most noted for her flight on the civilian-funded Inspiration 4 Space Mission in September 2021. The flight was sponsored by U.S. technology billionaire Jared Isaacman to raise funds for St. Jude Children’s Research Hospital in Memphis.

Proctor was born on March 28, 1970, in Hagatna, Guam, to Gloria Delores and Edward Langley Proctor Jr. Her father was a self-taught scientist who worked for NASA and instilled a love of exploration and science into his daughter at a very young age. Due to the work her father did, Proctor moved to Minnesota in her youth, then Florida, and ultimately New York, where Proctor graduated from Fairport High School in Fairport, New York in 1988.

Proctor chose to continue her education at Edinboro University in Pennsylvania and earned her BS in Environmental Science in 1992. After graduation, she worked as a video editor for the Rochester, New York channel 8, WROC for two years. She then relocated to Arizona State University for graduate studies in geology. Proctor also worked as an Earth Science instructor and project counselor of ecology while enrolled into Arizona State University. She obtained her MS in Geology in 1998, and her PhD in Science Education in 2006.

Dr. Proctor obtained her pilots license at the age of 36. Her classmates called her a modern-day Renaissance Woman and gave her the call sign “Leo” during training. Additionally, Dr. Proctor has spent 21 years as a professor at South Mountain Community College, in Phoenix, Arizona. She has taught geology, sustainability, and planetary science. Dr. Proctor has made numerous television appearances on the Discovery Channel, the Science Channel, and also appeared in an episode of Genius, by Stephen Hawking.

For several years, Dr. Proctor had been an analog astronaut, participating in a wide range of research that included crew cohesion, exercise, and nutritional studies. In 2009, Dr. Proctor was a finalist for the NASA Astronaut Selection Process but did not make the final cut. She has participated in four analog missions, which are months of living in a simulated outer space environment. In 2013, she spent four months living in the Hawai’i Space Exploration Analog and Simulation (HI-SEAS); one month in Barrow, Alaska in 2014; San Pedro, Chile in 2016; and three weeks on the Bering Sea in 2017. During her 2013 mission, Dr. Proctor filmed the show Meals for Mars, and ultimately wrote a cookbook with the same name.

In 2021, Dr. Proctor was selected as the pilot of the privately funded all-civilian Inspiration4 spaceflight mission, making her the first African American pilot of a spacecraft and the first African American civilian astronaut. The mission launched from the Florida Kennedy Space Center’s Launch Complex 39A on September 16 in Crew Dragon Resilience and returned on September 18.

Dr. Proctor also holds the rank of Major in the Civil Air Patrol and is a Arizona Wing Aerospace Education Officer. She made her major film debut in 2019 in the movie Emulator. She married Steven Borth on December 31, 2014, and the couple reside in Arizona. Dr. Proctor continues her work inspiring others to explore all areas of STEM by being a international motivational speaker.