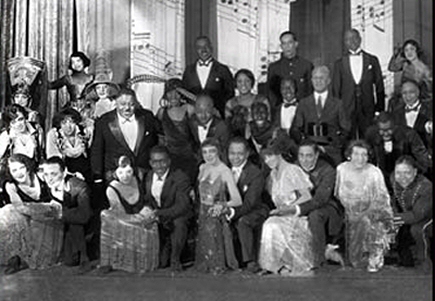 Shuffle Along, a musical comedy by composer Eubie Blake and lyricist Noble Sissle which featured an all-black cast, was the most significant achievement in black theatre of its time. Shuffle Along opened at the Howard Theatre in Washington, D.C., in late March, 1921 for two weeks. It was later performed at the Sixty-third Street Theatre in New York City, New York in May, 1921.

Promoters and theatre managers were skeptical at first as to whether white audiences would accept a colored musical because no black show had been successful on Broadway in over 12 years. The musical mélange became an instant hit because of the energetic, vivacious, torso-twisting dancers that gave birth to the speed shows that were to characterize black productions thereafter. It also won the distinction of becoming an actor’s show during its more than its 200 performances. It proved that white audiences would pay to see black musical comedies on Broadway.

Among the cast were Eubie Blake, Noble Sissle, Paul Floyd, Lottie Gee, Gertrude Saunders, Roger Matthews, Mattie Wilkes, Lawrence Deas, and Adelaide Hall.  The plot centers on the characters Sam and Steve who run for mayor in Jimtown, USA. If either one wins, he will appoint the other his chief of police. Sam wins with the help of a crooked campaign manager. Sam keeps his promise to appoint Sam as chief of police, but they begin to disagree on petty matters. They resolve their differences in a rousing, humorous 20-minute fight scene.  As they fight, their opponent for the mayoral position, Harry Walton, vows to end their corrupt regime, underscored in the song “I’m Just Wild about Harry.” Harry wins the next election as well as the girl and runs Sam and Steve out of town.

Recording companies marketed all of the 18 song from the show including “Love Will Find a Way” and “I’m Just Wild about Harry” (which became President Harry S. Truman’s campaign slogan in 1948) “Gypsy Blues,” “I’m Cravin’ for That Kind of Love,” and “Shuffle Along.”

The landmark production renewed the public’s interest in black theatricals and marked a decided turning point in the history of black entertainment in the United States.  It introduced to the Broadway stage a black chorus of partially garbed “girls” in the style of the white “Follies.” Because of the show’s popularity, the entertainment profession witnessed the return of black musical comedies to Broadway on a regular basis.