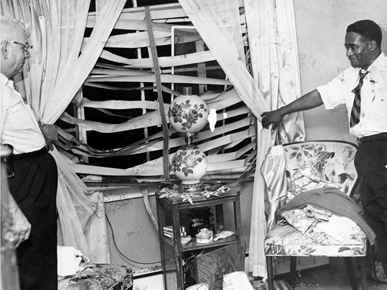 Arthur Shores' home after bombing in 1963
Courtesy The Birmingham News, Fair use image

Arthur D. Shores, attorney and civil rights activist, was born in Birmingham, Alabama on September 23, 1903.  He completed his primary and secondary education in that same city.  In 1927 he earned a bachelor’s degree in education from Talladega College in Alabama and then a law degree from LaSalle Extension University in 1935.

When he began his practice in 1935, and for nearly two decades afterwards, Shores was the only licensed black attorney in the state of Alabama.  Despite Klan terrorist attacks and judges who referred to him by his first name, Shores remained steadfast in his determination to practice law in his home state.  In the area of civil rights, he challenged school segregation and voter registration discrimination.   In 1955, Shores served as co-legal counsel for Autherine Lucy’s discrimination lawsuit against the University of Alabama for refusing her admittance because she was African American.  In 1956 a federal judge ruled in her favor, allowing Lucy to become the first black student admitted at the University of Alabama. However, three days after she entered the institution, it expelled Lucy, stating that her presence encouraged civil disorder.  Shores also assisted in trying the 1963 discrimination lawsuit that ended Alabama Governor George Wallace’s efforts to bar Vivian Malone, James Hood, and other African Americans from attending the University of Alabama.

Shores was also active in the 1963 Birmingham civil rights campaign. Working with attorneys from the National Association for the Advancement of Colored People (NAACP) Legal Defense Fund, he challenged Alabama officials who attempted to block their work on behalf of demonstrators.  When Birmingham police subsequently arrested thousands of marchers, including Dr. Martin Luther King, Jr., Shores and his NAACP colleagues convinced the Supreme Court to declare those arrests unconstitutional.  He also won the federal court case that desegregated Birmingham public schools.

White supremacists retaliated with acts of terrorism against Shores.  On several occasions they bombed his home and others in his middle class black neighborhood, prompting local residents to call the besieged community “Dynamite Hill.”   Because local law officials refused to bring the perpetrators to justice, Shores guarded his house with a shotgun.

In 1969 Shores became the first black elected to the Birmingham City Council and he remained in that seat until 1978.  In 1975, Shores received an honorary doctorate from the University of Alabama. Arthur Shores died in Birmingham at the age of 92 on December 16, 1996. He was survived by his wife of 58 years, Theodora; two daughters, Helen Shores Lees, and Barbara Shores Martin.