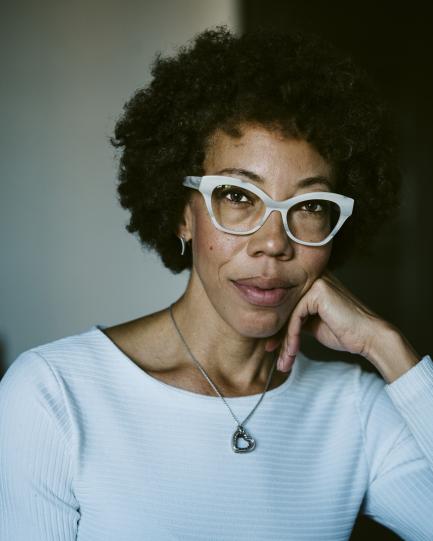 Amy Sherald, a portrait artist, was the first African American woman to complete a presidential portrait for the Smithsonian Institution’s National Portrait Gallery.  She is best known for painting the official portrait of former First Lady Michelle Obama. Sherald was born on August 30, 1973 in Columbus, Georgia, Amos P. Sherald III, a dentist, and Geraldine W. Sherald. Although she had a late introduction to painting, her parents had hoped she would pursue a career in medicine.

Sherald earned her bachelor’s degree in painting at Clark-Atlanta University and then later received her graduate degree at the Maryland Institute College of Art in 2004. In the same year, she suffered from a life-threatening heart condition, cardiomyopathy, but continued to manage. She cultivated her art skills in Norway and China and worked as an art museum curator and exhibit organizer in South America.  But for several years, she had done little art work in order to tend to her mother, ailing aunts, a brother who was dying of cancer, and also her own health condition. In December 2012, she received a new lease on life when she underwent a successful heart transplant at age 39.

After the surgery, Sherald continued her artwork often painting subjects that feature invariably unsmiling African American common folk, males and females, young and old. While their clothing is often filled with color with interesting and appealing designs, the backgrounds are blank and monochromatic.  Their faces are painted gray as a way to deemphasize race. She selects her subjects by approaching strangers who strike her as interesting subjects, photographs them outdoors in natural light, and then chooses their clothing prior to painting.

In 2011, Sherald displayed her first solo exhibition at the Sonja Haynes Stone Center at the University of North Carolina at Chapel Hill. More solo and group exhibits followed across the United States, but she was still relatively unknown. In 2016, her obscurity changed significantly when she became the first woman to win the Outwin Boochever Portrait Competition sponsored by the Smithsonian Institution’s National Portrait Gallery. According to Sherald, her first-place entry, titled Miss Everything (Unsuppressed Deliverance), featured a girl perhaps playing dress-up that was inspired by Alice in Wonderland. She received $25,000, a space for her painting in the museum, and national attention for her winning portrait.

The pinnacle of Sherald’s career came in 2017 when Michelle Obama hand-selected the artist to paint her official portrait for the National Portrait Gallery. The former first lady posed on two separate occasions for the portrait. Sherald commented she believed the portrait of the First Lady represents the highlight of her professional career, commenting, “(Ms. Obama is) a human being with integrity, intellect, confidence and compassion. And the paintings I create aspire to express these attributes: A message of humanity.”  Sherald and fellow artist Kehinde Wiley, who painted the official portrait of President Barack Obama, are the only African American artists to have completed presidential portraits for the National Portrait Gallery.

Self-described as an introvert, Sherald works in her Baltimore, Maryland studio and only executes about fifteen portraits per year.  The portraits currently sell for approximately $50,000 each.