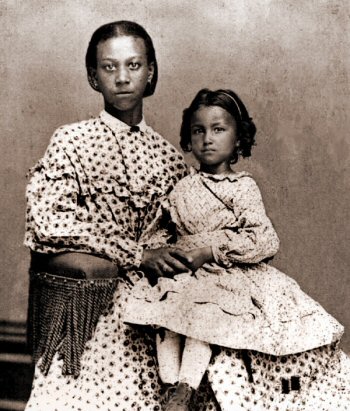 Ella Sheppard, soprano, pianist and reformer, was the matriarch of the Fisk Jubilee Singers, a social reformer, confidante of Frederick Douglass, and one of the most distinguished African American women of her generation. Sheppard was born a slave in 1851 on Andrew Jackson’s Hermitage plantation. A biracial relation of Jackson’s family, her father Simon Sheppard had purchased his freedom by hiring himself out as a Nashville, Tennessee liveryman and hack driver. When Sheppard was a little girl, her slave mother Sarah threatened to drown Ella and herself if their owners refused to permit her Simon to purchase Ella’s freedom. But an elderly slave prevented her, predicting that “the Lord would have need of that child.” Her owners refused to release Sarah, but allowed Ella to go with her father, who soon remarried and, fearful he and his daughter might be reenslaved, fled penniless to Cincinnati, Ohio.

A German woman taught Ella Sheppard to play piano. Ella also managed to persuade an eminent white vocal teacher to give her twelve lessons, provided she keep them a secret and arrive and depart at night by the back door. After her father’s death from cholera, Ella supported herself, her stepmother, and her half sister Rosa by teaching at a school for former slaves. Managing to save about six dollars in five months, she proceeded to Nashville in 1868 to enroll at the Fisk Free Colored School.

Her skill as a pianist immediately drew the attention of Fisk treasurer and musician George White, who appointed her his choir’s accompanist and assistant choral director as he prepared his troupe for a tour of the North. Though frail and sickly, Sheppard valiantly remained with the troupe for seven years. She accompanied the choir on piano, oversaw many of their rehearsals, conducted the Jubilees from her position among the singers on stage, and continued to collect and transcribe spirituals until the troupe’s repertoire numbered over a hundred. When, in 1878, an exhausted and exasperated White finally resigned as director, Sheppard stood in for him for the troupe’s last months. She joined White’s subsequent troupe of Jubilees but retired from Jubilee work when he disbanded his group in 1882.

Sheppard built a house for her mother and half sister in Nashville, and married one of the most prominent black ministers in the United States, Rev. George Washington Moore. They lived at first in Washington, DC, agitating against the saloons in their neighborhood until it had been transformed into one of the most desirable areas of the city. Returning to Fisk, she trained and inspired generations of Jubilees, and by the time of her death in Nashville in 1915, Ella Sheppard had become in intellect, in spirit, and in musical attainment one of the truly gifted women of the world.