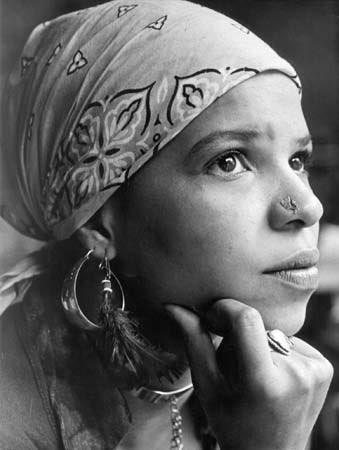 The author, poet, and playwright Ntozake Shange was born Paulette Williams on October 18, 1948 in Trenton, New Jersey.  Until she was eight, she lived in a racially diverse community among well-educated upper middle class black and white families.  She socialized with prominent musicians and performers, including Dizzy Gillespie, Chuck Berry, Charlie Parker, Miles Davis, and Josephine Baker, all of whom were friends of her parents.

In 1956, the Williams family moved to racially segregated St. Louis, Missouri, where they remained for five years.  In St. Louis, Paulette was exposed to music, dance, art, literature, and opera but also to overt racism at her elementary school, which was one of the first in the nation to become embroiled in the tension over desegregation following the 1954 Brown v. Board of Education decision.  At thirteen, Paulette returned to New Jersey more observant of the inequities that were customarily faced by black American women.

In 1971, Williams changed her name to Ntozake Shange, which is Zulu for “she who comes with her own things and walks like a lion.”  From 1972 until 1975, Shange danced, wrote poetry, and taught humanities, women’s studies, and African-American Studies at a variety of colleges in Southern California.  In 1975, she returned to New York to produce her choreo-poem, “For Colored Girls Who Have Considered Suicide/ When the Rainbow Is Enuf,” her first literary piece that garnered national attention.

Ntozake Shange died on October 27, 2018 at an assisted living facility in Bowie, Maryland, She was 70.