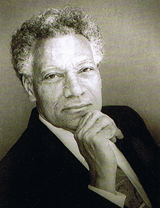 Throughout his career as a scholar and author, Ivan Van Sertima worked to transform the way people viewed and taught African history. Van Sertima was born on January 26, 1935, in Kitty Village, Guyana when it was still a British colony. After completing high school, he worked as a Press and Broadcasting Officer for Guyana Information Services. In the late 1960s, Van Sertima did weekly broadcasts to Africa and the Caribbean as a journalist.

In 1964, Van Sertima married Maria Nagy and together they adopted two boys. He then attended the School of Oriental and African Studies (SOAS) at the University of London, graduating in 1969 as an honor student with a Bachelor of Arts degree in African languages and literature. In 1970, Van Sertima began his graduate work at Rutgers University in New Brunswick, New Jersey. After his divorce from Maria, he married Jacqueline Pattern in 1984 and gained two stepdaughters.

Van Sertima began publishing before he came to the United States. In 1967, he published a dictionary of Swahili legal terms. While earning his graduate degree, he published his most famous work, They Came Before Columbus, in 1976. The book introduced his argument that people of African origin came to Central and South America long before Christopher Columbus arrived in 1492. The book achieved widespread attention in the African American community and gave a different insight into African history.

In 1977 Van Sertima received his Master’s degree and became an Associate Professor of African Studies at Rutgers in 1979. In the same year he founded the Journal of African Civilizations, editing and publishing the journal for decades. The Journal of African Civilizations help transform how African history was viewed and taught. Its articles described early African advances in agriculture, mathematics, arts, engineering, architecture, writing, medicine, astronomy, and navigation.

Van Sertima also discussed many of these topics in his several published books including Blacks in Science: Ancient and Modern (1983), Black Women in Antiquity (1984), The African Presence in Early Asia (1985), Great Black Leaders, Ancient and Modern (1988), and Egypt: The Child of Africa (1994).  His research also discussed the early African civilizations which had disappeared from history. In 1999, Van Sertima republished, in the African Renaissance, earlier essays which discussed the scientific contributions of Africans. He also published critical essays questioning the work of previous historians and authors about the African continent.

In 1974 Van Sertima was asked to join UNESCO’s International Commission for Rewriting the Scientific and Cultural History of Mankind. Furthermore, from 1976 to 1980 he was asked by the Nobel Committee of the Swedish Academy to nominate candidates for the Nobel Prize in Literature.

Ivan Van Sertima passed away on May 25, 2009, in Highland Park, New Jersey. He was 74 and was survived by his wife, Jacqueline and his four children.