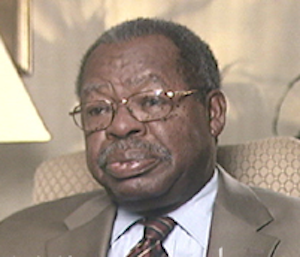 Ambassador Joseph Monroe Segars was born in Hartsville, South Carolina on November 6, 1938. He remained with his aunt and uncle in South Carolina while his parents moved to Philadelphia, Pennsylvania during the Great Migration to the North in search for better job opportunities. Upon graduating from Butler High School in Hartsville in 1956, he joined his parents in Philadelphia and began working in a lamp factory before entering college in 1957.

Ambassador Segars attended Cheyney University in Pennsylvania where he earned a Bachelor’s of Science degree in Education in 1961. After graduating from Cheyney University, he taught sixth grade in the Gary, Indiana public school system until 1967. He moved back to Philadelphia that same year and began teaching sixth grade in the Philadelphia public school system. Then, in 1970, he joined the U.S. Foreign Service and became the first African American to be assigned to the U.S. Embassy in Vienna, Austria.  Segars remained in this position until 1973.

In 1974, Segars was assigned to the U.S. State Department’s West African Affairs Bureau where he was the desk officer primarily responsible for Liberia and Sierra Leone. In 1976 he returned overseas as Consul General in Johannesburg, South Africa.  Segers was among the first African Americans to be assigned to South Africa and his arrival in Johannesburg coincided with the Soweto Uprising which was a student protest against the Afrikaans Medium Decree of 1974.

From 1978 to 1980 Segers served as Consul General in Kingston, Jamaica, and then the following year in 1981, he returned to Washington, D.C. to serve as the State Department’s desk officer for Zimbabwe, Lesotho, and Swaziland in the Office of Southern African Affairs. In 1983, Ambassador Segars was again appointed as Consul General, this time in Lagos, Nigeria where he remained until 1986.

In 1989, Segars returned to the United States and became a Career Counselor in the Senior Officer Division, Department of State Office Personnel. From 1992 until 1993, he was a member of the Senior Seminar of the Foreign Service Institute at the State Department.

On July 14, 1992, President George H. W. Bush nominated Segars as U.S. Ambassador to Cape Verde.  After U.S. Senate confirmation, he began his ambassadorship on March 24, 1993. Ambassador Segars remained in the island nation of Cape Verde until March 17, 1996, and then retired.

After his retirement from the Foreign Service, Ambassador Segars moved to Lakewood Ranch, Florida where he served as a consultant on African issues, and in 1997, received an honorary doctorate degree from Southeastern University. He was also an active member of Omega Psi Phi Fraternity.

On July 20, 2014, Ambassador Joseph Monroe Segars passed away at the age of 75 in Lakewood Ranch, Florida.