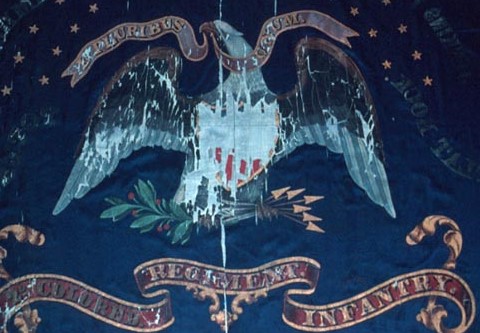 The Second Kansas Colored Regiment, also known as the 83rd U.S. Colored Troop, was best known for its bravery during the Civil War battle of Jenkins Ferry, Arkansas.

The Second Kansas Colored Regiment was authorized and established at Fort Scott and Fort Leavenworth, Kansas in June 1863. Soon afterwards active recruitment began among free blacks and ex-slaves who had escaped to Kansas from Missouri, Arkansas, and the Indian Territory during the first years of the War.  Between August 11, 1863 and October 17, 1863 eleven companies (100 men and officers each) were formed and on October 19th, 1863, the regiment left Fort Scott, Kansas on its first assignment, to escort a large supply train to Fort Smith, Arkansas. On November 1, 1863, Samuel Johnson Crawford, who would later become Governor of Kansas, was appointed Colonel of the Regiment when it reached Fort Smith.  The regiment set up camp at the Poteau River, two miles south of Fort Smith, and began training and drilling until it became battle-ready.  When not in battle the regiment spent most of its time on escort or garrison duty.

The regiment saw its first major military engagement before its recruitment was completed when Company A participated in the Battle of Baxter Springs, Indian Territory, on October 6.  The entire regiment remained at Fort Smith for garrison duty until March 24, 1864 when it was selected to participate in the Camden Expedition, an ill-fated Union attempt to drive south to capture Shreveport, Louisiana, connect with other Union forces from New Orleans, and then invade Texas.  The expedition failed and the Second Kansas Colored returned to Fort Smith.

Soon after the Camden Expedition the Second Kansas Colored fought its most notable engagement of the war, the Battle of Jenkins Ferry, Arkansas on April 30, 1864.  Days before this battle, Confederate forces at the Battle of Poison Spring, Arkansas, captured and then killed many members of the First Kansas Colored Regiment. The men of the Second vowed revenge and some of them charged into the conflict shouting “Remember Poison Springs.” During the battle the Second Colored became the first black Union soldiers to successfully capture a Confederate field artillery battery.  In doing so they also took a number of prisoners.

On December 13, 1864 the Second Kansas Colored Infantry was redesignated as the 83rd U.S. Colored Troops (U.S.C.T.) when the War Department decided to organize all black soldiers in the Union Army under a unified command. Operating under that designation, the regiment was assigned garrison duty for military outposts in Union-occupied areas of Arkansas for the remainder of the war. The regiment was disbanded on October 9th, 1865 in Little Rock, Arkansas, and discharged in Leavenworth, Kansas on November 27, 1865.