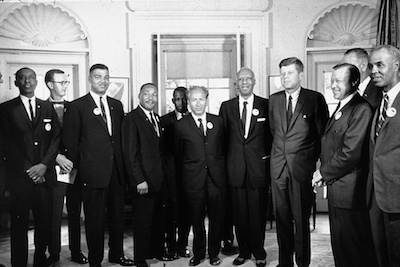 The idea of the Second Emancipation Proclamation evolved from conversations King had with his legal adviser, Clarence B. Jones. King believed they needed to get President Kennedy to issue a Second Emancipation Proclamation on the anniversary of the first one. On June 6, 1961, King announced the idea during a New York City press conference where he reminded those in attendance of President Lincoln’s famous statement that the United States could not exist half-slave and half-free and that the Kennedy administration should recognize that the contemporary United States could not exist half-segregated and half-segregation free. Jones and a team of legal scholars, including members of the Gandhi Society for Human Rights, began to prepare the proposal, while King continued publicize the idea.

During the tour of the Lincoln Sitting Room in October 1961, King introduced the idea to President Kennedy, pressing him for a proclamation “outlawing segregation.” Kennedy told King that he would take it under consideration and asked the civil rights leader to draft the proposal. Two months later, while King led the campaign against segregation in Albany, Georgia, he sent President Kennedy a telegram, urging him to take action on the proposal.

On March 24, 1962, King announced that President Kennedy had invited him to submit a second Emancipation Proclamation for the president’s signature. King and his legal staff promised to have the document ready on May 17, 1962, the eighth anniversary of the Brown v. Board of Education decision. The preamble to the document that King and his advisers drafted referenced Lincoln’s Gettysburg Address, Frederick Douglass’s autobiography, and Kennedy’s own book, Strategy for Peace. The document cited hundreds of legal precedents, including Harry S. Truman’s military desegregation order in 1948, the Declaration of Independence, the Constitution, and the Emancipation Proclamation. The document called on President Kennedy to use the powers of the executive office to eliminate all forms of racial discrimination.

Despite having invited its presentation, Kennedy did not issue a second Emancipation Proclamation and notably avoided all centennial celebrations of the original Emancipation Proclamation. On November 20, 1962, Kennedy did issue Executive Order 11063, prohibiting racial discrimination in federally-supported housing or related facilities. He also introduced an omnibus civil rights bill to Congress after his civil rights address on national television and radio on June 11, 1963. The demands of the Second Emancipation were not filled until President Lyndon B. Johnson signed the 1964 Civil Rights Act that outlawed segregation.