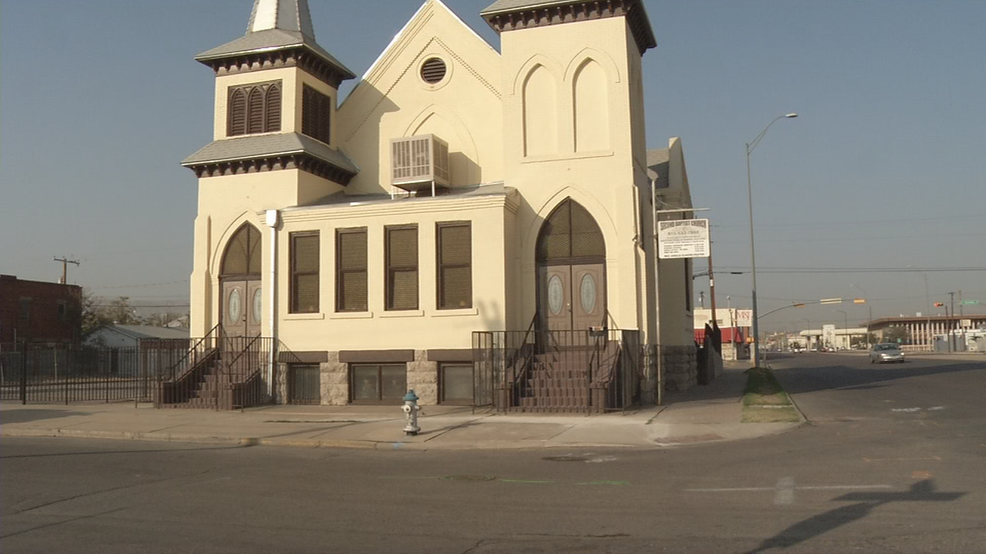 The Second Baptist Church, the oldest black Baptist church in El Paso, Texas, was established in 1884. The brick edifice that is its current home was erected between 1903 and 1907 at Second and Virginia Streets, standing at the intersection of the city’s Mexican American neighborhood, the black American community, and downtown El Paso.

The five founding church members worshipped in a small rented one-room adobe house, with Calvin Neal officiating as the interim pastor. In 1886, each of the five members donated $10.00 which was augmented by a $200 donation from the white First Baptist Church of El Paso. With that money they purchased a lot on Utah Street. After worshiping in a temporary building, in 1888 the congregation, with a $400 loan from the Baptist Home Mission Board and contributions from prominent families in the larger community, built a permanent edifice at 515 Utah Street.

Beginning in 1903 Reverend J.T. Hill led the congregation in constructing a new building for $25,000 at the Church’s current location on Second and Virginia streets. That building was completed in 1907. A church bell was installed and rung through the years on special occasions.  In 1918, a parsonage at 311 Tornillo Street was purchased, which provided a residence for the Church’s ministers for many years.  It was sold and another parsonage was purchased at 5804 Dolphin Street.

Reverend H. A. Rogers, formerly of Chicago, Illinois, became pastor of Second Baptist in 1923. One year later he founded the Second Baptist Church Herald, a weekly newspaper. That paper recorded on August 31, 1924, a membership of more than 50 families. The Church was completely remodeled when Reverend O. A. Crenshaw, formerly of Terrell, Texas, served as pastor between 1944 and 1952.

The Reverend L. B. Adams, pastor of Second Baptist from 1952 to 1970, was the longest serving minister in the Church’s history.  His ministry expanded church membership to include many of El Paso’s prominent black citizens, and increased the Church’s engagement and influence within the larger black community.  He and his wife, Vern C. Adams, were well respected and actively engaged in religious and civic affairs within the broader El Paso community. Their involvement increased the visibility and prestige of Second Baptist Church locally and statewide.

In 1969 the church was partially destroyed by a fire. Church membership grew when the structure was restored.  During that year the first youth ministry was established. The Church was listed in the El Paso Historical Registry in 1981 and three years later celebrated its 100th Anniversary in 1984 with Reverend L. B. Adams as the Centennial celebration speaker.

The Reverend Amelia Elmore is the current pastor. She is committed to keeping the church vibrant and grounded, despite a smaller congregation.