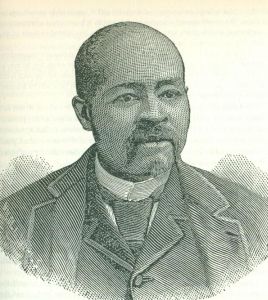 William Thomas Scott, also known as W.T. Scott, was a tavern/ hotel owner, newspaper owner/ editor, and politician in the latter half of the 19th century and the first decade of the 20th century.  He was the first African-American selected by the convention of a national political party as its candidate for the office of president of the United States. Scott was born free in Newark, Ohio, on April 28, 1839, to Lucy Scott (his father’s first name is unknown).

Scott received barber training and worked on riverboats on the Ohio River before the Civil War. He married Nellie (died ca. 1871 – last name unknown) in c.1861 in Cincinnati. In 1863, he enlisted in the Union Navy and served 18 months as steward on the USS Clara Dolsen at Cairo, Illinois. He married Lizzineky Jenkins (died ca. 1884) in Cairo in 1872.

Scott’s business ventures that involved liquor, gambling, and vice kept him from obtaining political office, and instead he focused his efforts within party politics at the local and state levels. He championed the idea that African-Americans should receive patronage and government appointments in direct proportion to the number of votes cast in elections. He was critical of party bosses in both major political parties and identified himself as an Independent (Negrowump) at a time when nearly all black voters were Republicans.

By the time Scott declared himself a Democrat in 1883, he was considered the wealthiest African-American in southern Illinois. By the 1890s, he shifted his focus to the state and national politics where he obtained significant success. In 1890, he became president of the National Negro Democratic League (1888- ) and the Negro Bureau within the National Democratic Party.  He served in various high offices in the Bureau until 1915. Scott also was president and founder of the National Negro Anti-Expansion, Anti-Imperialist, Anti-Trust and Anti-Lynch League (1899- ). Scott by this time was known nationally as a superb organizer, a gifted speaker, and a person of wealth.

For a brief period, Scott was a prominent leader in the National Negro Liberty Party which was active at the state and national levels between 1904 and 1910. In 1904, that party’s convention, notable in part because it supported government pensions for ex-slaves, selected him as its candidate for president of the United States. His nomination led to a scandal, however, and his name was removed from the party’s ticket when he was arrested for failing to pay a fine for having operated a “disorderly house.”