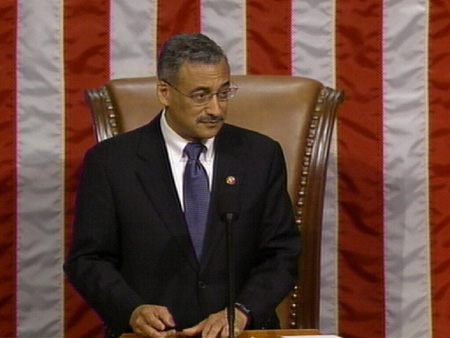 Scott, a Democrat, entered politics in 1978, running a seat in the Virginia House of Delegates representing Newport News.  In 1983 he was elected to the Virginia State Senate.  During his years in the Virginia Assembly, Scott sponsored legislation related to healthcare, education, crime prevention, economic development, consumer protection and social services.  One of his measures increased the Virginia minimum wage and another produced improvements in healthcare benefits for women, infants, and children.  Scott also sponsored legislation that created the Governor’s Employment and Training Council.  His sponsorship of the Neighborhood Assistance Act led to granting tax credits to businesses for donations made to approved social service and crime prevention programs

In November, 1992 State Senator “Bobby” Scott was elected to his first term in the U.S. Congress where he represented Virginia’s 3rd Congressional District. His victory made him the second African American elected to the United States Congress from Virginia (after John Mercer Langston in the 1880s).  Additionally, he is the first American of Filipino heritage to be elected to Congress.

Scott, a member of Sigma Pi Phi and Alpha Phi Alpha Fraternities, is currently spearheading legislation aimed at comprehensive reform in juvenile justice and crime prevention.  His Youth PROMISE Act would provide resources to state and local governments to prevent juvenile crime.  He is also the principal sponsor of the Every Student Counts bill which is designed to reduce high school dropout rates and increase access to higher education for all students.