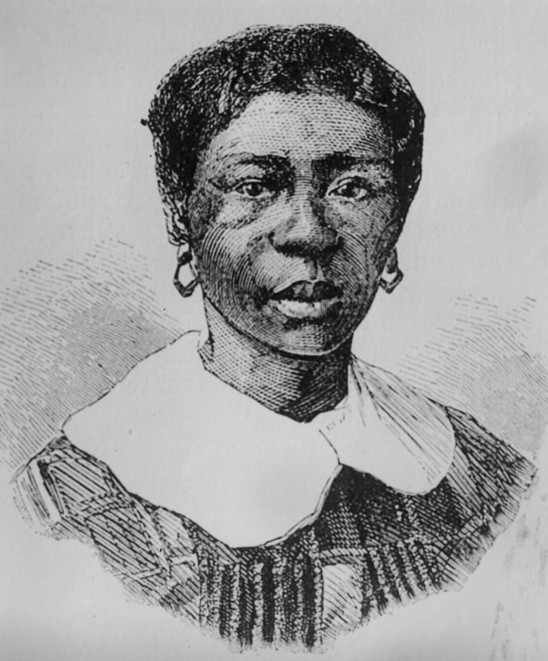 Harriet Robinson Scott was an enslaved person who is best remembered for being the second wife of Dred Scott.  Harriet was born a slave on a Virginia plantation around 1820.  From a young age she was a servant to Lawrence Taliaferro, a US Indian Agent.  In 1834 Taliaferro left his home in Pennsylvania for a post as agent to the Sioux Nation at St. Peter’s Agency in the Wisconsin Territory.  He took Harriet with him to his new post.

In theory, slavery was prohibited in Wisconsin Territory under the terms of the Northwest Ordinance of 1789 and the Missouri Compromise of 1820.  Yet many US Army officers stationed in the territory continued to buy, sell, and own slaves. While at St. Peter’s Agency, Harriet met her future husband, Dred Scott, who had come to nearby Fort Snelling in 1836 as a valet to the fort’s new doctor, John Emerson.  The couple was married in either 1836 or 1837 in a ceremony performed by Taliaferro.  At the time of their marriage Dred was around 40 and Harriet was about 16.  This was Dred Scott’s second marriage, as his wife had been sold away years before.  After the marriage, ownership of Harriet was transferred to Dr. Emerson.  Harriet soon gave birth to the Scotts’ first daughter, Eliza, in 1838.  She would later give birth to two sons who died in infancy and a second daughter, Lizzie, in 1843.  All of Harriet’s children were born in free territory.

In December of 1843, the Scott family was in Missouri when Dr. Emerson died suddenly.  Because his will made no reference to the Scott family, his entire estate—including Dred, Harriet, and their two daughters—was passed on to his widow, Mrs. Irene Emerson, who rented them out to work in the St. Louis area.

In 1846 Dred Scott, who had worked as a valet for Army officers in the Mexican War, offered Mrs. Emerson $300 for his family’s freedom, but the offer was rejected.  That rejection led both Dred and Harriet to file multiple lawsuits for their freedom.  Their lawsuits eventually culminated in the United States Supreme Court case of Dred Scott v Sandford in 1857 in which the Scotts lost not only the case but any claim to US citizenship as well.  Shortly after the trial, Harriet and the rest of the Scott family were sold because Mrs. Emerson had remarried to an abolitionist Congressman, Clifford C. Chaffe of Massachusetts. The Scott family was sold to the Blow family of St. Louis because only Missouri residents could own slaves in the state.  Ironically, the Blow family freed them within hours of claiming ownership.

After being freed, Harriet worked as a washerwoman.  Because of her fear that Dred would be kidnapped and sold back into slavery, she would not allow him to go on any of the abolitionist tours which offered to pay him handsomely to make an appearance.  After her husband’s death from tuberculosis in 1858, she continued to live in St. Louis with her unmarried older daughter until her death in an alleyway apartment on June 17, 1876.