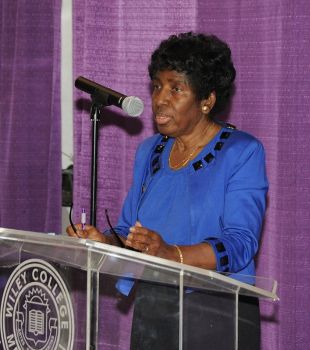 Civic and educational leader Gloria Dean Randle Scott, the first African-American president of the Girl Scouts of America and the twelfth president of Bennett College, was born on April 14, 1938 in Houston, Texas to Juanita Bell and Freeman Randle.  Scott grew up in Houston, attending Blackshear Elementary and Jack Yates Secondary School.  Acquiring a scholarship, she continued her education at Indiana University where she received a BA in 1959, an MA in Zoology in 1960, and a PhD in education in 1965.

While attending Indiana University, Scott became a research associate in genetics and embryology at the Indiana University Institution for Psychiatric Research, and taught biology at Marion College. Upon graduation, Scott moved to Knoxville as Dean of Students and Deputy Director of Upward Bound in 1965.  She relocated to North Carolina A&T University in 1967 when she accepted the position as Special Assistant to the President and Educational Research Planning Director.

In 1975, Gloria Scott served as the first African-American president of the Girl Scouts of America.  In her youth, Scott joined the Junior Girl Scout Troop #155 at Jack Yates School and later noted that the segregated troop provided her with unique experiences and also helped develop her leadership skills.  Scott served as the President of the Negro Girl Scout Senior Planning Board in the 1950s.  During her last year as president of GSA in 1978, the trefoil was redesigned; the new symbol highlighted the diversity of the girl scouts with a silhouette of three girls–black, white, and brown.

Scott returned to Texas in 1976 and worked as the Institutional Research Planning Director at Texas Southern University and the next year moved to Atlanta, Georgia to become Vice President of Clark College.  In 1987, she was selected as president of Bennett College, an elite black women’s college in Greensboro, North Carolina.  In 2001, she resigned her post and moved to Corpus Christi with her husband Will Braxton Scott, a Sociology professor.  Will Scott, a veteran, died in 2004 and is buried in Arlington National Cemetery.

Gloria Scott remained in Corpus Christi.  She has received numerous awards, including six honorary degrees, League of Women Voters prizes in 2008 and 2010, the Star of Texas Award in 2009 and the Urban League Star Award. She was noted as a History Maker in November 2010. She is a member of Delta Sigma Theta Sorority, has chaired the Corpus Christi Juneteenth Coalition for several years, and is an active member of the Corpus Christi Black Chamber of Commerce.  In 2005, Scott filed a federal lawsuit against the city of Corpus Christi to keep Solomon Coles School operating and now volunteers at the school and has served as president of its PTA.  She is also president of G. Randle Services, a consulting firm.