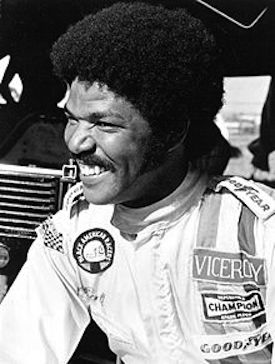 William Benjamin Scott, known in the racing world as “The Professor” because of his other career as a college instructor and administrator, was a second-generation African American race car driver.  He was born on February 4, 1945 in Los Angeles, California. Scott’s father, Willie (Bill) “Bullet” Scott, raced midget cars in Southern California in the 1930s and later became a mechanic.  Benny Scott, while in high school, worked on cars with his father and raced go-carts.

Scott knew that his passion would be expensive so in 1967 he earned his Bachelor’s and Master’s degrees in Psychology from the Los Angeles Mission College, and later obtained his Ph.D. from California State University at Long Beach. He became an instructor at the Los Angeles Mission College during the day, while competing in stock car events in Southern California at night and on the weekends. He finished the 1969 season ranked 10th.  During that season he won the Foreign Stock Car Association of Southern California title, his first championship. Racism on the track was always apparent. In Georgia, in 1971, Scott was permitted on the track only after a blacks-only ambulance arrived in case he had an accident.  Despite these challenges he finished third in the 1971 Cal Club regional Formula B standings.

Scott was featured in Champion Spark Plug’s first national print advertising featuring an African American driver.  Champion also became a secondary sponsor for Black American Racers, Inc. and a charter member of the Black American Racers Association (BARA). BARA was created in 1972 and quickly blossomed into a nationwide organization of 5,000 racers and racing enthusiasts from 20 states.  It supported African American efforts to integrate all aspects of auto racing competition.

Scott set an auto racing record at Laguna Seca Raceway in Monterey, California on May 4, 1975 where he achieved a pole position at 100.882 mph. He was the first driver ever to top 100 mph in a Formula Super Vee at Laguna Seca (called Mini-Indy at the time).  He was also the fastest driver during the entire weekend and even bested his qualifying speed in the race at 101.111 mph.

In 1976, Benny Scott was inducted into the Black Athletes Hall of Fame. He returned to Formula Super Vee racing in 1978 and finished the season for fellow African American driver Tommy Thompson who was killed in a crash at the Trenton Speedway in Trenton, New Jersey. Scott never competed after 1978, because of a lack of further corporate sponsorship.

Scott married Shill Scott in 1966.  At the time she was a high school teacher with a Master’s in art.  Together, they had one son, Damien. Benny Scott also had another son, Eric Parker, who was born and adopted in 1964.  The two were reunited in 1995. Scott worked many years as a psychology professor at the Los Angeles Harbor College in Southern California.  In 2001, he retired from his position as Dean of Academic Affairs at the Los Angeles Mission College to the San Juan Island in Washington State. Scott died on September 25, 2009 in at the age of 64.