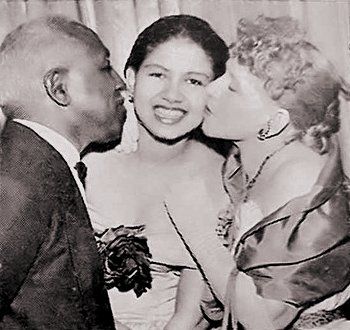 Phillippa Duke Schuyler was a child pianist, composer, and later journalist. Schuyler, born August 2, 1931, grew up in Harlem, and was the only child of George S. Schuyler, a prominent black journalist, and Josephine Cogdell, a white Texan from a wealthy and socially prominent family. Her parents were not Harlem civil rights crusaders, but rather conservatives and members of the John Birch Society, who believed that interracial marriage and the resulting children could solve America’s race issue. They also fed Phillippa a strict raw food diet, believing that cooking removed all of the vital nutrients from food. By playing Mozart at the age of four and scoring 185 on an IQ test at the age of five, Phillippa quickly proved to her parents and the world that she was a child prodigy.

Phillippa began giving piano recitals and radio broadcasts as child, and with the help of her journalist father she quickly attracted an enormous amount of press coverage.  In 1940 when she was nine, Phillippa became the subject of “Evening with a Gifted Child,” a profile written by Joseph Mitchell of The New Yorker, who heard several of her early compositions. Phillippa’s mother kept her isolated from other children by exclusively relying on tutors for her education. At the age of 13, Phillippa’s delusions and memories of her happy childhood were permanently tarnished when she stumbled across her mother’s scrapbook which described in detail how her parents thought of her as a genetic experiment. These feelings plagued Phillippa for the remainder of her life, and motivated her desire to travel, write, and play, so that she could find her place in the world.

She plunged herself into her music, and once she outgrew the child prodigy years she struggled to find a place in the American music community. On tour, especially in the South, she began to experience racial prejudice, something of which she had been mostly unaware during her sheltered upbringing. In order to continue to perform and make money, she became a world traveler, eventually visiting over 80 countries. Her world travels did not abate her sense of alienation from her native country and her parents and as a young woman Schuyler changed her name to Felipa Monterro and began to pass as white.

By her thirties, those world travels spawned her interest in journalism and afforded her fluency in numerous languages.  Those travels placed her in dramatic locales at important moments of history.  In 1960, for example, she was one of the few American journalists in Leopoldville (later Kinshasa), The Congo, to cover its independence.  Through the 1960s she would author several books based on her experiences in world travel. Phillippa Schuyler died in a helicopter crash on May 9, 1967, when she, while working as a Vietnam War correspondent, attempted to evacuate a number of Vietnamese orphans threatened by an impending Viet Cong guerilla attack.  Schuyler was 36.