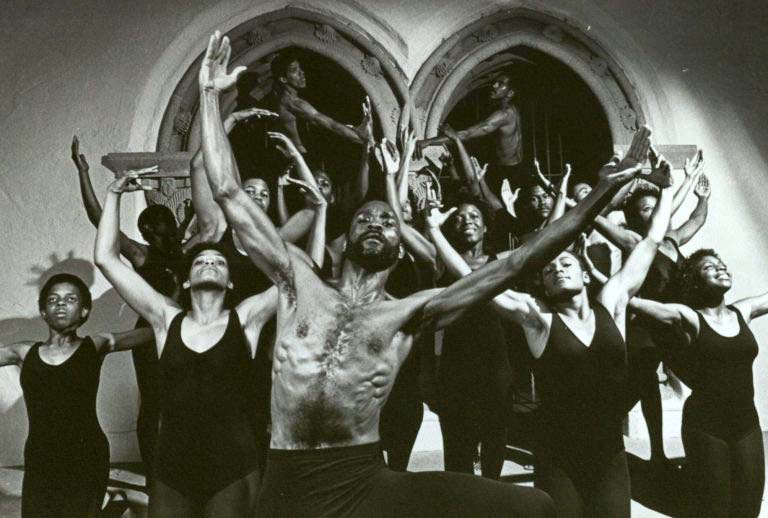 Danny Lyon Scarborough made his mark in the world in two arenas, as an innovative, Emmy Award-winning choreographer/dancer and as one of the first well-known African Americans to go public about having AIDS.  Born on July 27, 1947, he grew up on a farm near Wake Forest, North Carolina.  He was adopted by a caring, supportive family.  Those early years inspired one of his 1986 concerts based on African American folklore, “When Roosters Crow, Something ’Pose to Happen.”

Scarborough was especially close to his adopted grandfather who instilled a love of learning in him. He taught Scarborough the importance of knowledge as the best defense against racism and hatred.  Scarborough attended St. Augustine’s College, the University of Massachusetts, Yale University in Connecticut, and Columbia University in New York.

San Diego State University (SDSU) in California became Scarborough’s professional base.  He taught at the rank of Associate Professor in the Africana Studies program and was briefly chair of the department in 1986.  In 1977, he founded SDSU’s Black Repertory Theatrical Experience and for the next decade he wrote, directed, and choreographed each of its concerts.  The dramatic performances combined blues, jazz, and spiritual forms with African-themed dance expressions. The Los Angeles Times called him “San Diego’s missionary of Afro-American culture.”  In 1978, Scarborough’s group received an Emmy for his choreography of Roots, inspired by Alex Haley’s novel and the television miniseries of the same title.  Although no complete list of his works has been compiled, two additional plays, Daybreak in Alabama and The Path are among them.

Scarborough’s troupe included students from Africana Studies along with select performers from the community and local high schools.  He intentionally provided this opportunity for his college students as an expressive avenue in conjunction with classroom discussions and lectures. Scarborough considered the non-professional base an asset allowing his performers to “dance from their feelings.”  He felt this made his dance company stand out even from the far more famous Alvin Ailey dancers.

In 1984, Scarborough received the devastating news that he had AIDS.  He contracted it from a former lover who later died of the disease.  Neither man used condoms.  Scarborough resolved that he would work to prevent other black men from making the same mistake.  Consequently, he went public in 1989 about his bisexuality and AIDS.  He pleaded with his peers to turn to the lifesaving practice of condom use.

Danny Lyon Scarborough lived his last months at Fraternity House, a private residential nursing home for AIDS patients near San Diego.  He died on May 10, 1989, at the age of 41.  San Diego State University honors Scarborough’s memory by annually offering the Danny Scarborough Scholarship.