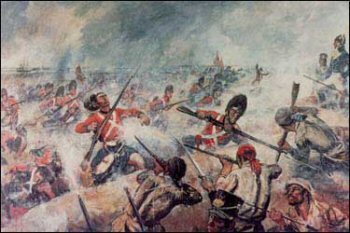 Joseph Savary, a hero at the Battle of New Orleans, was a native of Saint-Dominque (Haiti) who had fought with the French during the Haitian Revolution.  When Haiti became independent, Savary and his family fled and settled in New Orleans.  Savary’s occupation in New Orleans between 1809 when he arrived and the War of 1812 is unknown.  There is some evidence that he may have worked with Pierre and Jean Lafitte, notorious pirates who operated off the coast of Louisiana and Spanish Texas.

By the time of the War, General C.C. Claiborne, the U.S. military commander in Louisiana, who was familiar with Savary and other former Haitian soldiers, suggested to Commanding General Andrew Jackson that they be incorporated in the United States Army against the British.  Jackson extended the offer to Savary who single-handedly raised a battalion from among the Free Negro emigrants from Santo Domingo, most of whom had fought as loyalists under the French flag in their native land.

The Second Battalion, Free Men of Color of the Louisiana Militia, some 256 men, including staff officers, were assembled in New Orleans and inducted into the service of the United States on December 19, 1814. On the same day, Savary who had already assumed the rank of Captain was promoted to the rank of second major.  With that promotion he became the highest ranking black man in the history of the U.S. Army.

The Second Battalion’s first battle occurred four days later on December 23rd on the banks of the Mississippi River in New Orleans.  Savery and his men fought back the British who were attempting to enter the city.  Savary urged his men in French to “March on! March on, my friends, march on against the enemies of the country.”

Despite their initial success, the Second Battalion and another all-black battalion which had been subsequently organized, were held in reserve during the main Battle of New Orleans on January 8, 1815.  Savary’s battalion defied orders and rushed to the front to participate in the rout of British forces.  General Jackson believed that rout began when one of Savary’s men killed British Commanding General Pakenham on the field of battle.  At the end of the conflict Jackson publicly praised the Second Battalion and its commander.

When the war ended, however, Jackson, at the request of New Orleans’s white residents, ordered all black troops out of the city.  Local white citizens were concerned that the presence of armed blacks in the city might destabilize slavery and lead to a general uprising.

Savary and his men took the removal orders as an affront.  He and many of them returned to Spanish Texas where they were welcomed by Pierre Lafitte. Savary and his men joined Mexican rebels fighting for their nation’s independence.  The date Savary left Texas to return to the United States is unclear.  However he was listed as living in New Orleans in 1822.