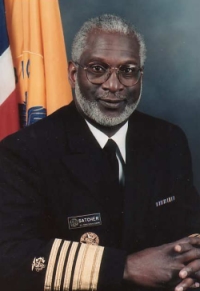 David Satcher, physician, educator, and administrator, was born in Anniston, Alabama, on March 2, 1941 to Wilmer and Anne Satcher.   In 1963 Satcher graduated from Morehouse College in Atlanta, Georgia.  He earned a M.D. and Ph.D. in cytogenetics from Case Western Reserve University in 1970.

In 1979 Satcher became a professor and later chair of the Department of Community Medicine and Family Practice at Morehouse School of Medicine.  In the early 1980s, he also served on the faculty of the UCLA School of Medicine and Public Health and the Martin Luther King/ Drew Medical Center in Los Angeles, California, where he developed and chaired the King/ Drew Department of Family Medicine. While in his position, Satcher negotiated the agreement with the UCLA School of Medicine and the Board of Regents that created a medical education program at King/ Drew. In this new program, he directed sickle cell research.  In 1982, Satcher began his five year presidency at Meharry Medical College in Nashville, Tennessee.

In 1988, Satcher began a career in federal government, serving concurrently as Surgeon General and Assistant Secretary for Health.  The Surgeon General holds the military rank of Vice Admiral in the United States Navy. In 1993, he became the Director of the Centers for Disease Control and Prevention and Administrator of the Agency for Toxic Substances and Disease Registry.

In 1998, Satcher was sworn in under President William Clinton’s administration as the third African American and 16th Surgeon General of the United States.  As Surgeon General, he advocated for better healthcare for the poor and ethnic minorities and he pushed to destigmatize mental illness.  He served in this position through part of President George W. Bush’s administration until 2002.

During his distinguished career, Satcher earned 18 honorary degrees.  He also received awards from the American Academy of Family Physicians, the American Medical Association, the American College of Physicians, and Ebony magazine. In 1995, Satcher received the Breslow Award in Public Health and two years later the New York Academy of Medicine Lifetime Achievement Award.  In 1999, he received the Bennie Mays Trailblazer Award and in 2001 the Jimmy and Roslyn Carter Award for Humanitarian Contributions to the Health of Humankind from the National Foundation for Infectious Diseases.

Satcher and his wife, Nola, reside in Bethesda, Maryland, and have four children.  Vice Admiral Satcher is a member of Sigma Pi Phi fraternity.