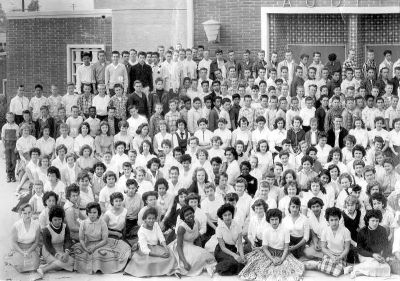 In the article below historian Jean-Paul R. deGuzman briefly introduces the multiethnic history of Southern California’s San Fernando Valley, a popular region that one local chronicler calls nothing less than “America’s Suburb.”  The narrative that follows, part of deGuzman doctoral research at the University of California, Los Angeles, is a selective snapshot of a far more complex history.

Southern California’s San Fernando Valley is arguably one of the most recognizable suburbs in the post-World War II United States.  Although the popular images of the Valley as the playground of white middle-class families staking their claim in the suburban American Dream or the land “Valley Girls” and their malls have their own important histories, here I focus on the region’s often overlooked multiethnic past.

Long before there was anything labeled “the San Fernando Valley,” the indigenous Tongva and Chumash peoples called the region home.  Following their dislocation and land dispossessions during the Spanish and subsequent Californio regimes, the Valley became a destination for European American homesteaders after California became a state in 1850.

By the 1880s railroads reached the east Valley town of Pacoima, formally established in 1887, and it became the home of railroad workers, laborers, and farmers.  Small populations of African Americans, Mexican Americans, Japanese Americans, and to a lesser extent, Filipino Americans, slowly grew, crafting a unique community that interacted in markets, on farms, and in schools.  As real estate developers built suburban homes across the Valley during the early 20th century, restrictive selling practices and zoning reified racial segregation as a daily fact of life.  Areas such as Pacoima became the only neighborhoods to accept people of color.

World War II served as a watershed moment for the San Fernando Valley.  In addition to the mass incarceration of local Japanese Americans, the physical geography of the Valley rapidly changed.  As defense industries located to neighborhoods such as North Hollywood and nearby cities such as Burbank, new suburban developments for plant workers likewise began to sprawl throughout the orange orchards and wheat fields.  Although this suburban boom largely bypassed Pacoima, African American migration to the community accelerated during World War II and afterward due to job opportunities afforded by the Valley’s newfound role in the post-war military industrial complex.

Housing quickly became a heated site of contention over the future direction of the San Fernando Valley.  Although private developers spearheaded the construction of the suburban landscape, in 1946 the City of Los Angeles, responding to the housing needs of returning veterans, oversaw the construction of the racially integrated Basilone Homes public housing complex in Pacoima.  African American veterans and a burgeoning black middle class also moved into the privately developed Joe Louis Homes.  Despite these opportunities, the San Fernando Valley’s African Americans and other people of color could not escape the racism that accompanied the spatial growth of the region.

Life was far from easy for the African Americans who attempted to put down roots beyond the historic black core in Pacoima.  During the 1960s, both the affluent and middle class suburbs of the Valley consistently remained between 95% and 100% white.  The United States Supreme Court may have struck down racially restrictive covenants in the 1948 Shelley vs. Kraemer case but segregation continued to profoundly shape the experiences of the Valley’s communities of color.  Banker and realtor discrimination and on occasion violence and intimidation followed those individuals who sought a life beyond the confines of segregation.

Nonetheless Pacoima’s local communities of color were vibrant and dynamic. African Americans forged a strong sense of community centered around the Calvary Baptist Church and the San Fernando Valley chapter of the National Association for the Advancement of Colored People (NAACP).  Likewise post-war Japanese Americans in Pacoima returned to their farms and established two community centers and the San Fernando Valley Nishi Hongwanji Buddhist Temple.  Although there were examples of racial segregation in local schools, some of San Fernando High’s African American, Japanese American, and Mexican American youth got together in a garage in the late 1950s and established the rock and roll group, the Silhouettes.  One member of the band, Richard Valenzuela, soon rose to meteoric fame as Ritchie Valens whose hybrid chart-topper La Bamba blended a Chicano folk ballad with American rock.

The San Fernando Valley also witnessed the Civil Rights Movement.  Throughout the 1960s the local NAACP, working with multi-faith and multi-racial fair housing councils and the Valley chapter of the American Civil Liberties Union used the courts, boycotts and street protests to challenge racial boundaries.  After California’s Rumford Act was passed in 1963, local activists also relied upon its California Fair Employment Practices Commission to help them challenge cases of racism in housing and employment.

Los Angeles was a powder keg of urban upheaval by the mid-1960s, witnessing the Watts Rebellion, the Chicano Moratorium, and the East Los Angeles Blowouts.  As anxious white suburbanites turned their attention to these events, parallel rebellions were fomenting in the Valley itself.  Students, both at San Fernando High School and San Fernando Valley State College (SFVSC; now known as California State University, Northridge), along with their community allies, were the key engines of these movements.   Chicana/o and black activists calling for educational equity led a student strike at San Fernando High that resulted in the temporary closing of the school, the politicization of many students, and the establishment of Ethnic Studies classes.

Across the Valley in the affluent Northridge area, activists with the SFVSC Black Student Union, including many from Pacoima, initiated a rebellion that changed the university for decades to come.  The immediate catalyst for the rebellion was the physical assault of a black athlete at the hands of a white assistant coach.  What began as a critique of this initial incident and the general second-class treatment of African Americans in the Athletic Department, evolved into a larger movement that exposed the dismally low enrollment and retention rates of African American students and lax hiring practices that continued to exclude black faculty and staff hiring even after the legislative gains of the Civil Rights Movement.  In 1968 students of color and their white allies briefly occupied the SFVSC hall of administration.  College administrators and the LAPD attempted to mete out harsh and immediate “justice” to the activists.  Although many white members of the campus Students for a Democratic Society were involved in this protest, only students of color, 24 members of the Black Student Union (including one Mexicano youth and a Native Hawaiian woman) were charged with an astonishing 1,730 felonies.

Only a handful of students faced jail time, in part due to student, faculty, and community support especially from the American Civil Liberties Union (ACLU) and the national NAACP.  The student rebellion led to the founding of the Department of Pan-African Studies and the bolstering of an Education Opportunity Program for students of color.  Subsequent student activists and their allies later established programs and departments in Chicana/o Studies, American Indian Studies, Asian American Studies, and most recently, Central American Studies, in part reflective of newer communities settling in the Valley.

As the San Fernando Valley moved into the 1970s and 1980s, the region’s demography dramatically changed following the landmark 1965 Hart Cellar Act that abrogated racially restrictive immigration laws and ushered in new waves of Asian and Latino migrants.  Legions of African Americans from the historic community in Pacoima migrated to other parts of the Valley.  They joined other African Americans and people of color from beyond Pacoima who reaped the benefits of previous activism to integrate the suburbs.   Nevertheless many of the early families who built the post-World War II black Pacoima continued to stay in the neighborhood.  Today Pacoima is about 7% Black.

This growing multicultural population prompted new fears as white homeowners in the Valley over the next three decades were at the forefront of implicitly racialized initiatives that challenging busing, called for lower taxes to contain welfare costs, and demanded (unsuccessfully) the secession of the San Fernando Valley from the City of Los Angeles.  Relatedly many white residents deserted the Valley completely for new suburbs far beyond Los Angeles in the Santa Clarita and Antelope Valleys.

Today the entire San Fernando Valley, like Los Angeles, is now a “majority-minority” region.  Latinas/os roughly comprise a numerical majority at 42.6%, whites are the next largest group with 41.1% of the population; Asian Americans and Pacific Islanders make up 8.7% of the population and African Americans are 4.0%.  This racial diversity, however, should not deflect our attention away from the first generations of the Valley’s people of color who, in the face of harsh interpersonal and institutional racism, carved out homes, communities, and histories.