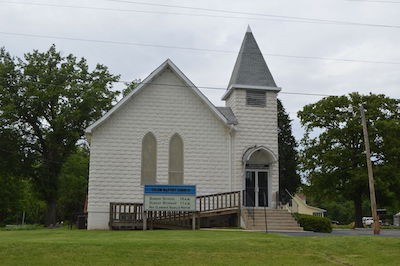 Salem Baptist Church, in Alton, Illinois, first organized in 1819, still stands as the only predominantly African American congregation in Madison County, which is situated along the Mississippi River across from Missouri. African American stonemason Madison Banks and white contractor Samuel Marshall, both from Alton, built the church sometime in the early 1820s.  They were assisted by two members of the congregation, John Walker and William Emery.  Conflicting dates about the church’s founding can be attributed to the later construction of the first building in 1912. It is believed that Salem Baptist Church’s first congregants were organized in 1819 on a local farm, by a Baptist Missionary named James Ely Welch.

Illinois was a free state, admitted to the union as such in 1818, but the state allowed fugitive slaves to be captured.  Additionally “Black Codes,” enforced prior to 1865, prevented full equality for African Americans in Illinois. Those living in the surrounding communities were frequently restricted from economic and educational opportunities that whites took for granted. Therefore, Salem Baptist served not just as a place of worship, but also a center for educational, cultural, social, and community events as well as club meetings and other non-religious activities for African Americans in the area.

The congregation at Salem Baptist Church built a new structure, the one currently used, in 1912.  At the same time a Presbyterian Church (also named Salem) was erected just one mile away from the Baptist Church. As a result, Salem Baptist Church increasingly became referred to in Madison County as the community’s “black” church, whereas Salem Presbyterian functioned as a “white” church.   This designation occurred despite the fact that Salem Baptist’s activities were advertised in the local newspaper and attended by blacks and whites.  In 1923, for example, a local newspaper reported that the “annual church picnic attracted more white people than colored.”

Traditionally, the women (in any church) play a key role in raising funds to keep operations moving smoothly. This was certainly the case at Salem Baptist.  Over nearly two centuries they organized bake sales, carnivals, suppers, dinners, teas, and balls in their effort to financially support the church.  The congregation organized a Ladies Aid Society for its women members.  They, in turn, sponsored a college scholarship program and a Progressive Club for the youth of the church.

By the 1960s the church membership, never more than 200, began to decline as a consequence of the racial integration of nearby churches and migration from Madison County.  The current Salem Baptist Church grounds consist of the church building, a cemetery established in 1903, various other outbuildings constructed in 2002, and a contemporary sign.  The church and its surrounding grounds were added to the National Register of Historic Places on December 31, 2013.  The current Pastor of Salem Baptist Church is the Rev. Bruce Willis.